Having played around with steel tins a few days ago, and come up with my Mk II attempt at a robust, screw top, alcohol/meths stove, it was time to try out a couple of tweaks. 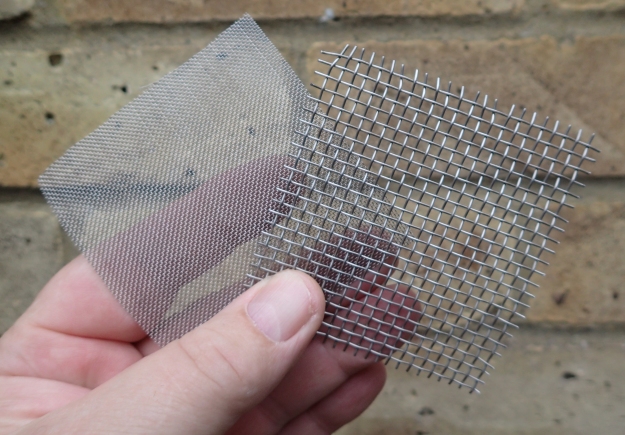 Using a more open gauze produced no weight saving, the very opposite resulted

Other than using a slightly thinner section of ceramic wadding, therefore not compressed so much, I did wonder if I could lose another gram or two by using a more open wire gauze. But found that this uses a thicker gauge wire and actually came in at two and a half times the equivalent weight. So it was back to using my first choice.

My second tweak was to include a choke in the top of my stove. Mk III had a very thin 1g copper sheet disc cut and fitted beneath a wire gauze cap, while Mk IV stove had .016 aluminium sheet cut into a disc with a small square of wire gauze beneath it.  The circular cut out in the copper measures 33mm diameter and was created simply by running the point of a penknife round a bottle cap placed in the centre. The hole cut in the centre of the aluminium sheet was a very different affair. Hacked rather than cut might be a better description! Having no way to hand to create this, I simply folded the disc in half and cut a half moon approx 25mm diameter in the centre with a pair of Leatherman Raptor shears. The disc, sans centre,  weighs 2.4g. 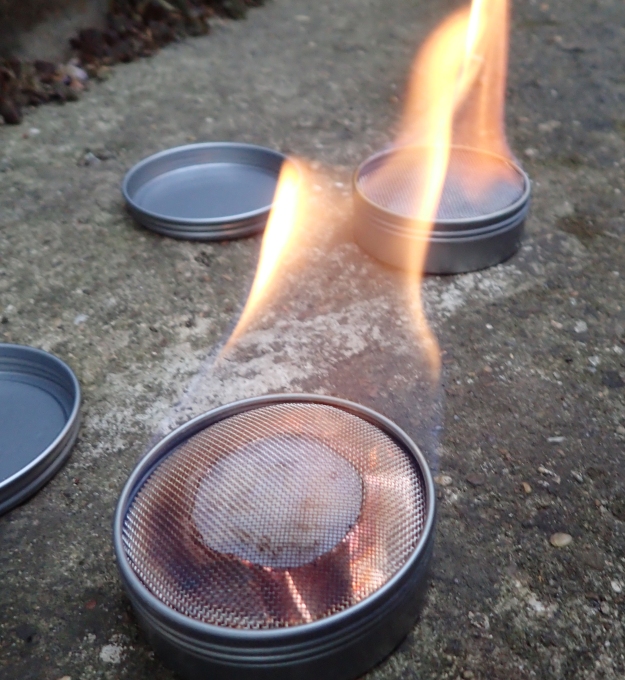 Burn times between my Mk II and Mk III home made stoves were compared. 45ml of fuel was used in each

It was a fairly cool evening at 18° with a slight breeze. In common with my last trial with a home made stove, I didn’t use any form of windshield. Next up is to get some boil times rather than burn times.

As it is, it is looking as though my Mk III is coming in as most effective in burn time and almost as light as the lightest. 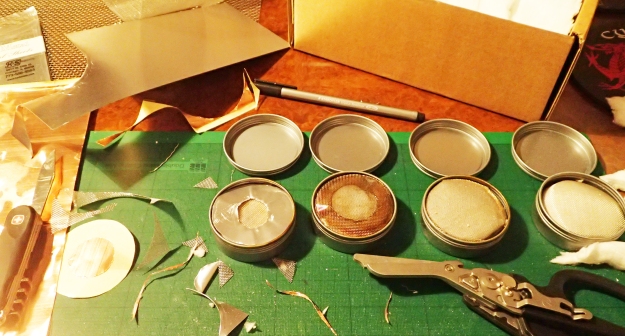 The tools of the job, from left to right- Mk IV, Mk III, Mk II, Mk I. Mk I was the untested disaster!

Three Points of the Compass has used stoves of various types, that have relied on a variety of fuels, over the years. In recent times I have become less fussed about all-out speed- now I simply get on with another task while water heats etc. I also don’t like noise around my campsite- my Jetboil and Primus OmniFuel are often simply too intrusive, especially on a quiet morning.

Additionally, I seek simplicity. To this end, for the last couple of years I have been enjoying my Speedster Stoves. Reasonably priced and burning  alcohol/meths, there really isn’t much to go wrong with these. Gary makes them out of small aluminium party favour tins with some wadding inside, held down by a bit of metal gauze. They are similar to the Zelph StarLyte, but I prefer the Speedster for its screw top lid, the plastic lid on the Zelph can split. 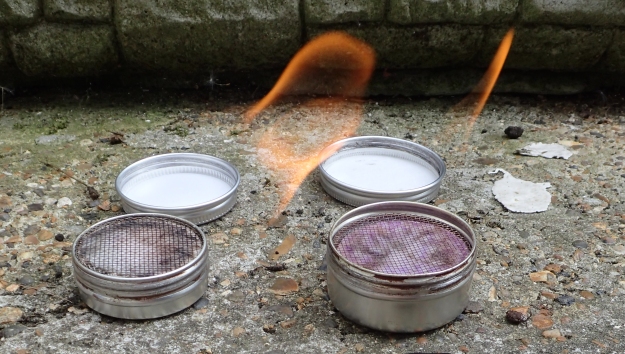 The two sizes of Speedster Stove that Three Points of the Compass has been relying on for recent treks. The largest only weighs 18g. So light that a second already primed with fuel can also be taken if wished

In common with a number of other users of these stoves I have found the soft metal a little problematic over time. The threads wear and the fine dust can jam, cross threading is also a more frequently encountered issue. I wiped mine with copper grease which alleviated the problem a little but not entirely.

At the very reasonable cost, I could simply throw a problem stove away and buy a replacement, but with a hike of 1000 miles plus over three months to consider next year, I want a stove that is less likely to wear, so went looking for a steel version. I failed miserably so resolved to have a crack at making my own. 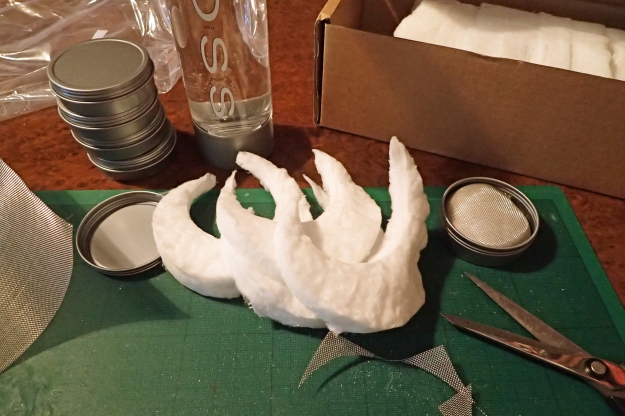 Constructing my own alcohol stove. The completed one on the right was Mark I and never got as far as being lit. I had attempted to simply fold the wire over but it was too stiff, Mark II (below) had snipped edges and enabled the rim of the wire circle to be bent, holding the ceramic gauze down without problem

I searched the supermarket shelves for a suitable screw top steel container that I could re-purpose. I found plenty of aluminium containers of various sizes but no steel tins. A few minutes on eBay called and I ordered a half-dozen 2oz screw top tins from the US. Each one of these weighs 21g empty.

Ceramic fibre off cuts were also bought online. These are body soluble, the safer version of this type of material. Also a small square of stainless steel woven mesh and that was it. I had all the makings required for a first attempt. 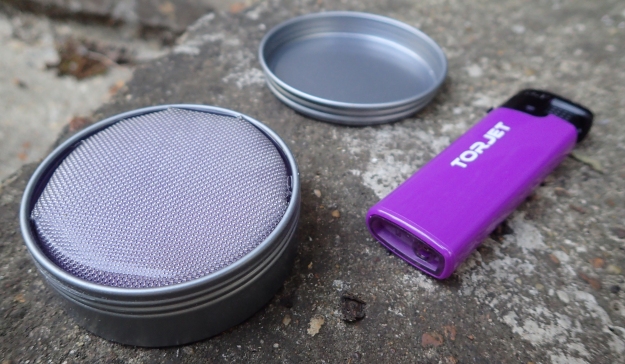 My Mark II attempt. Stuffed with a cut disc of ceramic fibre, held in by the wire mesh, the stove will hold 60ml of meths

Empty, my stove weighed 30.7g. When brim full of fuel, it weighs 75g. My first three burns with the stove tonight gave me between 17 minutes 15 seconds and 18 minutes 40 seconds of burn, but this was with a light breeze and without utilising my normal Caldera Cone. Air temperature was 23°.

Certainly the thread on these tin plated steel tins should be more robust and hold up longer over time. This is the balance that has to be accepted with the greater weight of this choice of material. I reckon my next attempt will utilise a little less ceramic wadding and if I use a wider weave mesh I can shave off a couple more grams.

I have to be careful though, I am encroaching on to the territory of the thousands of bods out there who love making their own stoves! Nothing wrong with that, but for me, Mark III or Mark IV should hopefully give me what I want. 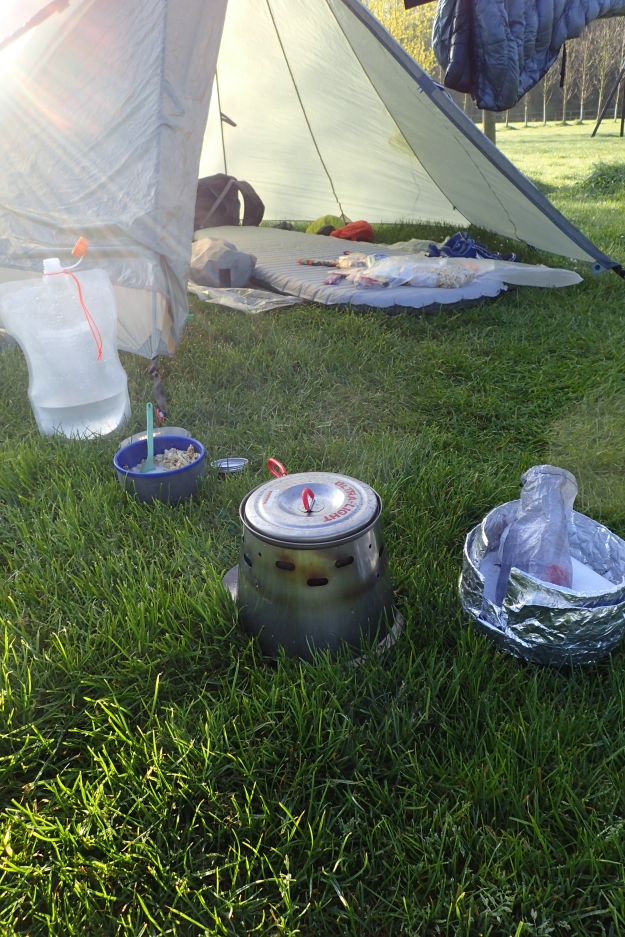 Farthing Downs are both scheduled ancient monument and the largest area of semi-natural downland left in Greater London. Within easy reach for Londoners, such pockets of land require stringent legislation to continue their protection.

The Site of Special Scientific Interest is situated in Coulsdon in the London Borough of Croydon and is managed by the City of London. This was the first section of the London LOOP to be opened, the trail runs straight through the centre of the chalk grassland.

Set into the signpost is a small disc for the Downlands Circular Walk; a popular short walk of three or six miles based around Farthing Downs and neighbouring Happy Valley