Gear talk: A few grams here, a few grams there… in search of the perfect pen- again!

Three Points of the Compass implores anyone venturing out on to a significant hike over multiple days to document it. If only for your own use. Scribbled notes, how you feel, the people you meet, weather, the sweat on a climb, the shivers on a ridge, the ache in the feet. Anything. Believe me, in the years to come you will read those scribbled notes and many of those recorded moments will come flooding back. That said- you need something to write on and something to write with.

While I still ring the changes on which notebook I take with me on a hike. In 2015 I thought I had found my solution as regards a pen. The Fisher Stowaway was a great, lightweight little solution with a huge ink reservoir. My only issue with it was the cost. It is not outrageously expensive but not a cost I want to be shelling out too frequently. I am not one for losing things on trail, I am pretty careful and methodical. However, when I undertook a five-month hike in 2018 I lost only one item of gear the whole trip. That was my Fisher Stowaway pen, twice. I took a couple of zero days a thousand miles in to my hike, exploring the beautiful city of Chester with just a notebook and pen, the latter came adrift somewhere. I cursed and ordered another to be picked up later in the hike. A hundred miles after receiving that one, I lost it again. I won’t buy another. They are too pricey to keep replacing. This rankles with me and strange as it may seem to those who do not fret over such things, I was determined to find the solution. 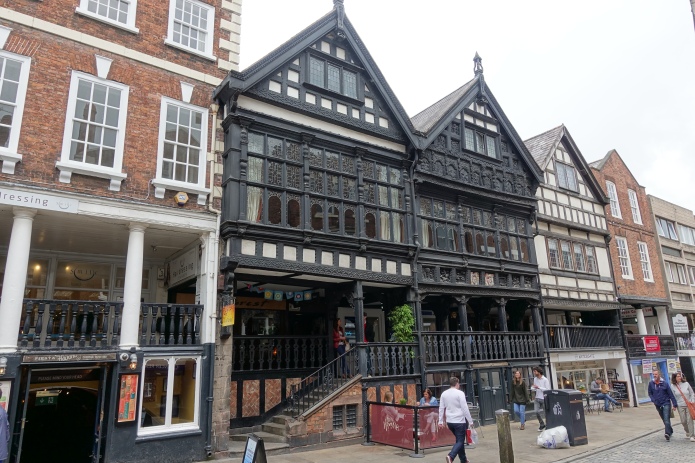 Roaming the streets of Chester on a rest day, I walked unencumbered by pack and simply carried a notebook and pen. The latter was lost. The only piece of kit lost on a two thousand mile hike

Over the last couple of months I have been looking again at what lightweight, reliable options there are, pen-wise, for use on trail. I could simply use a nasty little throwaway bic pen, which have broken, smudged or leaked on me too many times, or a pencil. I have many great little mechanical pencils and one of the terrific Koh-i-Noor options would be fine, but it is a pen I am after.

I wasn’t exhaustive in my investigations by any means. Three Points of the Compass is a big fan of the 58mm series of knives produced by Victorinox over the years and I first considered whether to rely exclusively on one of the Swiss Army Knives that include a pen in their toolset, or even just the pen, removed from the scales, as my main writing implement.

I frequently carry a 32,5g Midnite Manager from Victorinox on day hikes or of a few days, and they are great for keeping notes then; piggy-backing on the back of other tools I want with me such as blade and scissors. But the ink reservoir is tiny. It will never last the thickness of a moderate notebook. There are a number of 58mm Victorinox knives with pens, mostly in the Signature and Manager series. Probably the lightest of 58mm SAK with a pen is the Victorinox Scribe. Because it eshews scissors, only sporting a small blade, nailfile with screwdriver tip and tweezers (or toothpick) accompanying the retractable pen. This little knife comes in at just 17.3g. It is actually quite comfortable in the hand to write with. By opening the nailfile, it rests in the hand well. 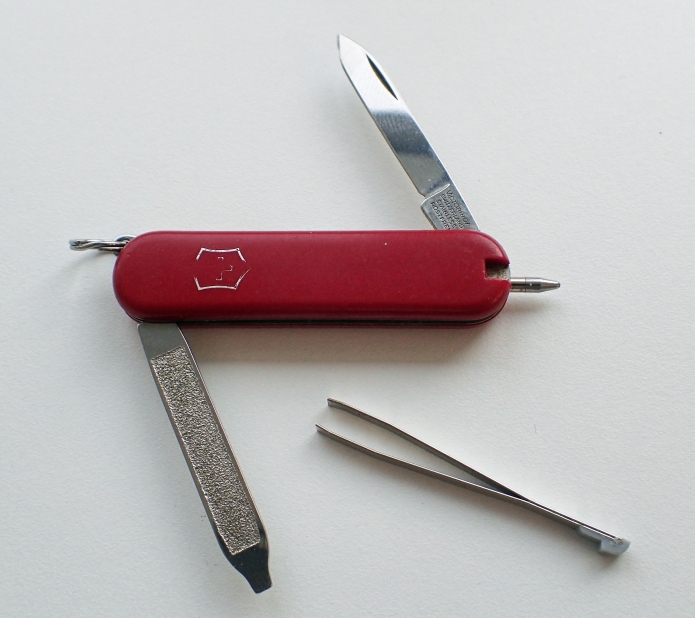 The pens in the 91mm range of knives and SwissCards are longer but still just as thin. There is a larger amount of ink in these but really not a great deal. If using just the Victorinox pen removed from the knife, they are great for just a few scribbled notes but I find them, quite literally, a pain to use for any extended time as their narrow width makes them uncomfortable to hold for longer note taking sessions- the end of a day write-up for example. All of these are pens are pressurised though and write quite well. Which is why I actually include one of the smaller 0.8g spare pens in my ditty bag. If I lose (again) my main pen, or it goes dry on me, I think a less than one gram spare is acceptable if probably superfluous addition. Do note that the Victorinox pens only come with blue ink, always have and it looks like they always will. I prefer black ink and blue is always going to remain a less favoured option for me.

The 26.8g Victorinox 2019 SwissCard Swiss Spirit comes with a handy set of tools that includes a pen

The True Utility telescopic pen is a lovely robust piece of kit, but the ink reservoir in the pen is tiny. One of the replacement refills is shown next to the pen

I then looked at the most minimalist pens I could find. I keep a True Utility telescopic pen on my keyring. Reasonably priced, great for note-taking but surprisingly heavy. Now 8.2g may not sound a great deal but containing such a tiny ink reservoir, I do not think this great keychain pen is suited to backpacking.

True, it does telescope out to a decent length, but the slippery tapering barrel is not particularly comfortable to write with for longer periods. Also that cap in which it is posted, if not attached to anything it is very easy to mislay. I had the same problem with the Inka pens I used to use while backpacking a decade ago. A pen to keep confined to my Every Day Carry I believe.

Even if not suited to backpacking, the True Utility telescopic pen makes a great EDC item, here on my keychain next to a cut down Blackwing 602 pencil

Next up was the cheap-n-cheerful, aptly named, Ohto Minimo ball point pen. This has a 0.5mm line width, is tiny and also comes with a thin little plastic card with pen sleeve that can be slotted into or stuck to just about anything. The clear plastic card is a little larger than most western business cards or credit cards so needs to be trimmed before it will fit a wallet. The work of just a few seconds with a pair of scissors. Refills for the pen are easily available but as the body of this pen is only 3.7mm thick, I again found it too thin to write with for extended periods. It’s weight though is incredible- less than 3g!

I wasn’t getting far in my meagre examination of miniscule pens. Rather than splash out on yet another, I decided to review where I was. I want a lightweight pen, I want black ink, I want reliability, I want affordability and I want it to last a reasonable write length. This all bought me back to my original Fisher Spacepen. Fisher do a pretty good range of pens but it was only the minimalist Stowaway that was ticking all the boxes. How about simply using a refill, by itself? The large ink capacity means that the body is thicker than the tiny little pens I had been looking at. I experimented for a couple of weeks using one to write with every day at work and home but still found the body too slim and a pain to hold for any length of time. Also the smooth body meant it would slip in my grip meaning I had to grasp it more tightly, making it more uncomfortable for extended periods. 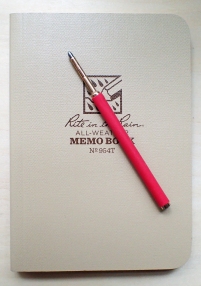 Some time ago I bought some electricians shrink tubing for wrapping the tops of my shepherds hook tent stakes, the bright red colour increasing visibility in long grass. What if I tried shrinking some of this around the refill body? Five minutes later I had my answer- result! It is easy to do this, cut a length of shrink-wrap, slide over the pen and gently run a hairdryer over it while turning the pen.

The pen is now very slightly wider-  some 6.5mm.  And doesn’t slip in my grip. I originally tried shrinking a length along the whole body, while this worked, I wondered if I could shave off another gram by trimming it to the essential.

Reducing the amount of shrink-wrap on the Fisher refill makes very little difference to the end-weight, this weighs 3.6g

A bare and unencumbered Fisher Spacepen refill weighs 3.4g, shrink-wrapping its length increases this to 3.7g, shortening the shrink-wrapping to a minimum had the negligible effect of reducing it to 3.6g, so barely worth it.

At least for the foreseeable future, that is it for me. For multi-day hikes I have a reliable pen at a decent weight that I can write with for reasonably extended periods though it shall never be as comfortable as a ‘proper’ barrelled pen. In addition, cos I’m a belt’n’braces guy, I have a little Victorinox refill in my ditty bag. For shorter hikes I can favour one of the Victorinox knife options that includes a pen, or if carrying a knife other than a Victorinox (it has been known), take one of the Victorinox pen refills.

It is of course possible to keep a recorded account of a hike on your phone- either as film, audio or in digital note form. However there is genuinely something tactile and pleasant in a dog eared, stained notebook, complete with bits stuffed into the flaps and hurried notes on bus and train times, who it is you have to meet when, resupply lists and phone numbers. I ask, write it down rather than relying on the digital- analogue rules in this format. 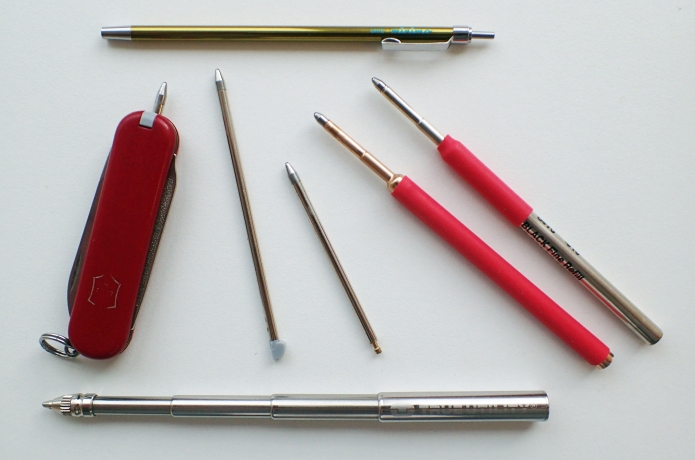 A range of lightweight pen options for backpacking

Many will be aware that lindal valve gas canisters can be expensive, while bayonet connector butane cartridges can be much more affordable. There is a cheap, tiny, copper transfer nozzle available for putting the contents of one, in to the other...
Gear talk- butane canister converter nozzles