Vierdaagse is Dutch for ‘Four day Event’, and recently while sorting out drawers at home, Three Points of the Compass came across various reminders of a very special four days in 1982 when completing the International Four Days Marches Nijmegen .

Medal awarded following completion of the Rheindahlen Allied Marches in 1982.

While Three Points of the Compass is not and has never been a competitive race-walker, many hundreds of very special hours were spent as part of a squadron marching team while serving with the British Army in the 1980s.

It was prior to this that I realised both an aptitude and fondness for longer walks but it is likely that any walking discipline that I may hold was refined in those army years, particularly when part of the British Army of the Rhine (BAOR), based in Germany.

Rheindahlen was the Joint HQ of the BAOR and it was there that an annual 40km one day road walk was organised by the British Army. This was completed by various regimental teams as well as being open to the public, particularly youth groups. Three Points of the Compass marched the Rheindahlen Allied Marches in 1982 as part of our teams training prior to Nijmegen Vierdaagse, this particular march was especially entered as most of the various town volkslauf mit wandern that we also marched were just half marathon distance for military teams.

When our squadron marching team joined various military organised or town sporting events across Germany and neighbouring countries this was no militaristic show of strength or any such nonsense, it was very much a coming together of communities and expression of solidarity. That said, any military teams marching had to conform to additional constraints. Teams were usually of a certain specified minimum number, we marched in uniform, frequently there was a defined distance class that we had to complete and a weight was specified that had to be carried in our chunky green cordura Berghaus packs. My pack can be seen in the image above, behind me and to the side of the doorway. Marching songs were sung with gusto as teams from other countries would try to out-sing each other. Military marching teams were always popular with spectators and children would frequently run to join us, marching in step alongside, until we reached town limits.

Military teams occasionally utilised an orderly. On the infrequent occasions when we used one, which was only on multi-day marches, he carried first aid supplies and rode a cycle with trailer and would go ahead to set up occasional refreshment halts. The distance an orderly had to cycle could frequently be far in excess of that marched by the team and orderlies were sometimes awarded an alternative completion medal.

We trained early mornings by marching, nothing complicated there. The best training for any walk remains, to this day, to walk. This was usually early morning or in our ‘free time’ at weekends. If attending an event we travelled by four-tonner and joined thousands of civilian residents. We marched a set course, frequently receiving participant medals afterward. More challenging was the 125km four day Marche du Souvenir et de l’Amitié. I wrote a little more on these here.

the largest multiple day marching event in the world

Sadly I note that one particular annual event I completed, the International Four Days Marches Nijmegen, or ‘Nijmegen Vierdaagse‘, has had to be cancelled in 2020 due to the coronavirus pandemic. Hopefully that wonderful gathering of people can resume next year. When I walked the 66th Vierdaagse in 1982, there were 19341 finishers, another 1711 dropped out prior to the end, mostly due to the hot weather on the first day.

Royal Engineers, 44 Squadron Marching Team, on the 66th Nijmegen Vierdaagse. Three Points of the Compass is third back to the right of the team. 20 July 1982

On three of the four days participants walk around a different town in the vicinity of Nijmegen- through the Dutch provinces of Gelderland, Brabant, Limburg and finally through Nijmegen itself. Distances vary, those walking follow either 30km, 40km or 50km routes every day of the four days. Military participants wear uniform and each team member carries 10kg of kit. We marched 40km each day, so 160km total.

For us in the British military, Nijmegen has a special place in our history for the part it played in Operation Market Garden. This military operation in 1944, devised by Field Marshal Montgomery and strongly supported by Prime Minister Winston Churchill and US President Franklin Roosevelt, failed in September 1944, it was ‘A Bridge too Far‘. The bridge over the Waal River in Nijmegen is crossed during the four day event.

Proud of our regiment, we wore extra identifying insignia on a brassard. I found mine sitting at the back of a drawer almost forty years after I wore it

With military origins in 1909, the Four Day Nijmegen Marches did include civilians and first became an international event in 1928, this coincided with the Olympic Games held in Amsterdam that year and teams from the UK, Germany and Norway attended. The first time the British military participated was when the RAF sent a team in 1950. It is now mostly civilians that participate in the event.

The number of people walking this event every July is huge though it appears few in the UK are actually aware of it despite a dedicated core of Brits returning year after year to participate. If it had gone ahead in 2020, there were 49,000 allotted places in total.

While military teams are a popular sight for spectators at Nijmegen Vierdaagse it is now the civilian that statistically dominates the four days of walking. There are tens of thousands of walkers following their respective route and distance. In recent years, some are dressed more as marathon runners than lightweight hikers. Civilians set off from one place while the military start from the organised ‘tent city’ where they overnight, joining the rest of the field further into the days hike. 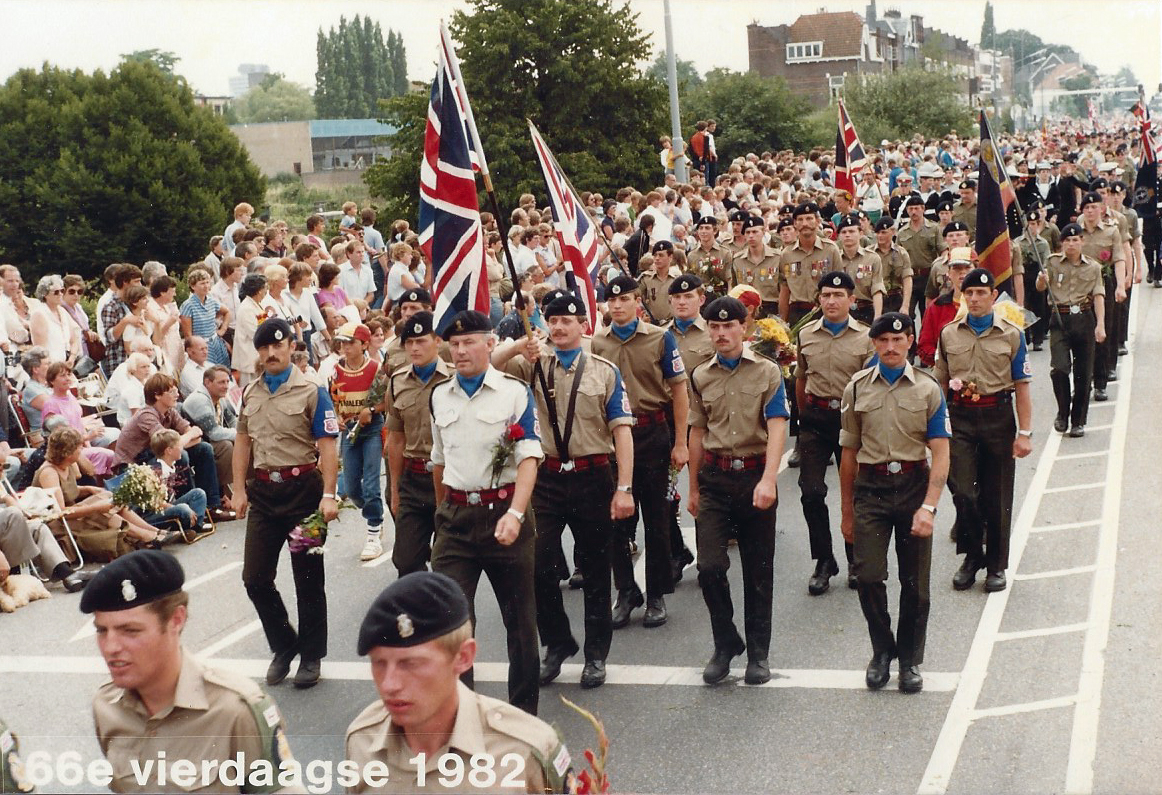 Our Squadron team on the final day parade of the 1982 International Four Days Marches Nijmegen. We had changed from our usual marching uniform on the outskirts of Nijmegen and as a result are not showing the grime of the days march. Three Points of the Compass marches behind the flag bearer. I am clutching gladioli, a Roman symbol of victory, given out by the spectators. The entry into the city on the final day is called Via Gladiola

Each participant who successfully completes all four days of the march receives a medal awarded by the organisers. Correctly entitled the Marching Proficiency Cross, or Kruis Voor Betoonde Marsvaardigheid, it is more commonly known as the Vierdaagse Cross. Since 2015 this has been awarded by the Royal Dutch Walking League (KWBN or Koninklijke Wandel Bond Nederland). Prior to 2015 they were known as the Royal Dutch League for Physical Education (KNBLO or Koninklijke Nederlandsche Bond Voor Lichamelijke Opvoeding) and it is their initials that appear on my 1982 five-armed cross. Before 1959, when the League received the Royal (Koninklijke) prefix, they were the NBVLO. Some people return to walk the event each year. Two participants have even received medals indicating seventy years walked.

Three Points of the Compass has yet to return. Despite it being nigh on forty years since I last walked the event, then as a soldier, who knows? Perhaps the next couple of years will see my walking the event again, this time as a civilian.

Follow Three Points of the Compass on WordPress.com
Join 277 other subscribers

Three Points of the Compass has recently been checking the various backpacking lanterns from the gear locker. On a grey winter's day, time was taken out to service two UCO candle lanterns.
Gear talk: servicing the UCO Original candle lantern

The UCO Candle Lantern has been around for decades. It may be thought a little surprising that UCO have not produced more accessories in the past forty years. But what can you add to a candle lantern? Three Points of the Compass has a glance at what there is.
Gear talk: UCO Original candle lantern accessories

The Olight Obulb is a small rechargeable LED globe lantern that provides 360° of soft light. It has a wide range of possible applications. The light weight and size, weather proofness, warm low light and runtime also makes it suitable for some backpacking and camping application.
Gear talk: Olight Obulb

Knife chat: 84mm of Victorinox excellence, a Cadet with a difference

Victorinox do like to release limited editions of their standard range of knives. Normally these will simply be a special colour for the handles. In 2022 Victorinox took the Cadet, one of their most popular knives and changed the handle material. This enabled them to add a couple of tools. Careful scale design has also made this an extremely attractive knife that pays homage to many of the iconic sights to be found in its country of origin.
Knife chat: 84mm of Victorinox excellence, a Cadet with a difference

Three Points of the Compass has previously looked at a couple of small and light lanterns for use in camp or home. One was candle-powered, the other was gas-powered. As an alternative- the little BRS-55 is a gas-powered 'candle' lantern.
Gear talk: the BRS-55 gas powered ‘Dream Candle’ lantern

This map measure is a quality instrument from a well-known French manufacturer, but with a twist. The Miledial was especially made for export to the US market, to be sold by one of the premier retailers of nautical instruments
Map measure of the month: John Hand & Sons “Miledial”

The study of many aspects of natural history, both indoors and in the field, can often be aided by the use of a magnifying lens, also called a hand lens, or loupe. There are cheap loupes and there are expensive loupes. There are really poor loupes and there are excellent loupes. What there isn't, is a really good cheap loupe. But it is possible to buy one that isn't too scarily expensive.
Trail talk: choosing a loupe
Loading Comments...
%d bloggers like this: