Each year, Three Points of the Compass makes a pilgrimage to Victorinox’s Flagship store in New Bond Street, London. This was the first flagship store that Victorinox opened in Europe. While it displays and sells watches, travel gear and fragrances, mostly on show as soon as you walk in the front door, it is the lower floor that attracts me. This is where over 400 models of Victorinox knives and some 650 household and chef knives are displayed.

As you descend the stairs, you are immediately presented with the repair table where customers can drop off their battered and damaged possession to be expertly repaired by the on-site craftsman.

Kitchen and household ware do not necessarily draw me, it is the central cased knife displays and wall mounted models that draw me to them.

I always have a small shopping list pre-prepared. To wander into such a shop without such discipline invites disaster. In London for a small planned walk later with a couple of friends from work (more on that in a future blog) I had an hour to spare in the morning to indulge in drooling over various knife models and variants that will never make their way in to my meagre collection. I am afraid not being in possession of deeper pockets has its disadvantages (or advantages as Mrs Three Points of the Compass might feel).

Victorinox released a number of models with walnut scales in August 2019, the diminutive Classic SD Wood (0.6221.63)  was one I was on the look out for. Being a natural product, every knife is slightly different

While Three Points of the Compass does have representatives from the various lengths of knife that Victorinox has and does produce, it is mostly the smaller knives, especially the 58mm range, that has attracted me over the years. There were a handful of 2019 releases that I had in mind for this visit.

Each year, Victorinox releases a small range of their knives with special alox scales, 2019’s offer was ‘Champagne’ 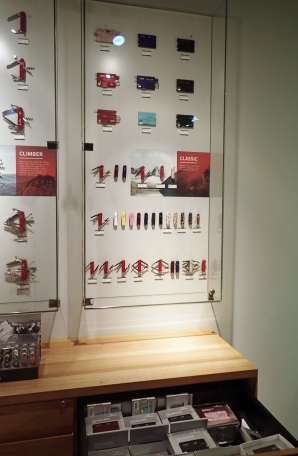 As a subscriber to the Victorinox newsletter, I had been sent the offer of a free Victorinox chopping board. Never one to look a gift horse in the mouth, I picked up mine from the downstairs till, the helpful lady who proffered this to me, also followed in my wake as I made my way round the store selecting my small number of purchases. She spread the walnut scaled knives across the counter so that I could select the one that was ‘just right’. I won’t relay here how much my choices cost but an applied discount made a welcome reduction.

A couple of my purchases will feature in some 2020 blogs where I take a closer look at some particular tool sets in the handy smaller knives that Victorinox offer the backpacker. But more on those next year.

It’s not all knives you know…