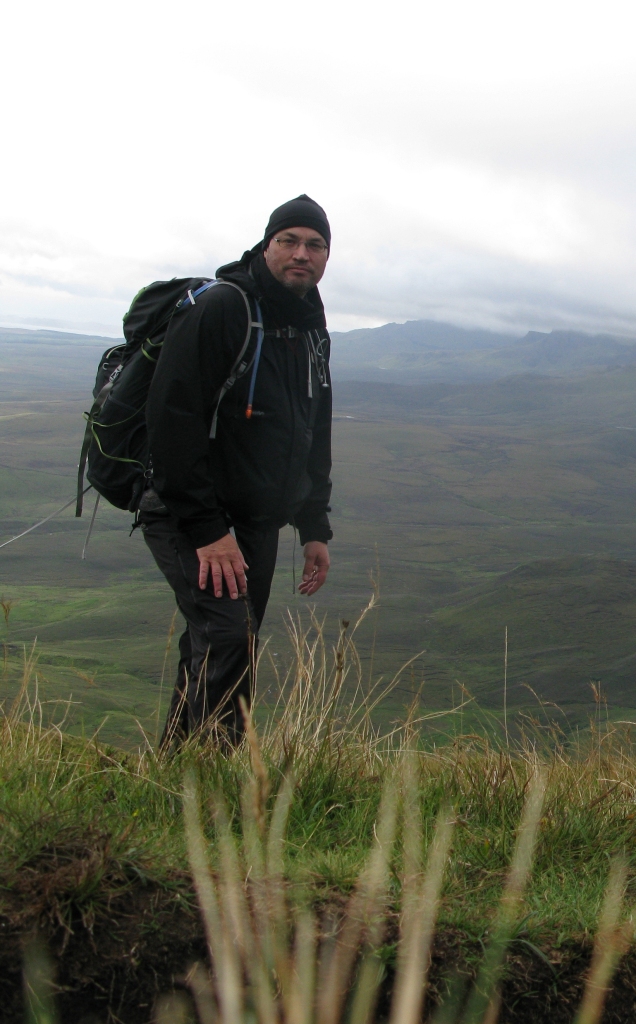 Three Points of the Compass -Torridon, Isle of Skye, 2012

Three Points of the Compass: the rules…

Well, everything needs rules, doesn’t it?

Possibly not. But what Three Points of the Compass chose to do was to have a set of guidelines to work to when I took off on my Three Points of the Compass walk. I had originally intended to walk the length of Great Britain when I completed my army service. I was discharged in August 1985, instead I concentrated on finding a job, a home and a girlfriend. The girlfriend eventually became my wife, the years rolled on and we had a beautiful daughter. My career path altered and progressed and my planned ‘long walk’ got put on to the back boiler, again.

I started walking again, frequently joined by my family, especially on some of the longer walks. It was time to begin planning again, particularly as the body aged and I slipped, far too easily, into enjoying a comfortable life.

Three Points of the Compass and family, West Country, 2009

Back to the walk. In common with most, Three Points of the Compass had certain things in his life that were difficult to ignore- demands on my time, both personal and professional. I had originally intended on setting off in the spring 2017. But circumstances changed and this got put back. Only by a few months but I wished to set off from the south west of England in the earlier part of the year, then head west initially to the Lizard and Land’s End, swing round and then advance, with spring on my back, up through the country via Offa’s Dyke and Wales until I arrived in the Scottish Highlands with, hopefully, good weather.. and midges. So, the walk was not delayed by a few months, but a year.

I walked unsupported beyond packages of maps and replacement trail shoes, socks etc. being posted on to me periodically by Mrs Three Points of the Compass (or Mission Control as she found herself promoted to) as my walk progressed. Clothing and gear had to be capable of handling extremes of the hot, cold and wet conditions experienced in Britain in spring and summer. I purchased my food as I went. Cooking was primarily done via cartridge gas stove. I carried what I needed, which included camping at both official campsites and, less approved, wild locations. I used mountain bothies and gladly went into hostels, both YHA and Independent, if there were space. A (fairly) lightweight ethos presented itself. Once I set off I did not use any mechanical means on my route other than a few short ferry crossings where necessary, so no lifts, no buses, no trains, just my old knackered body. 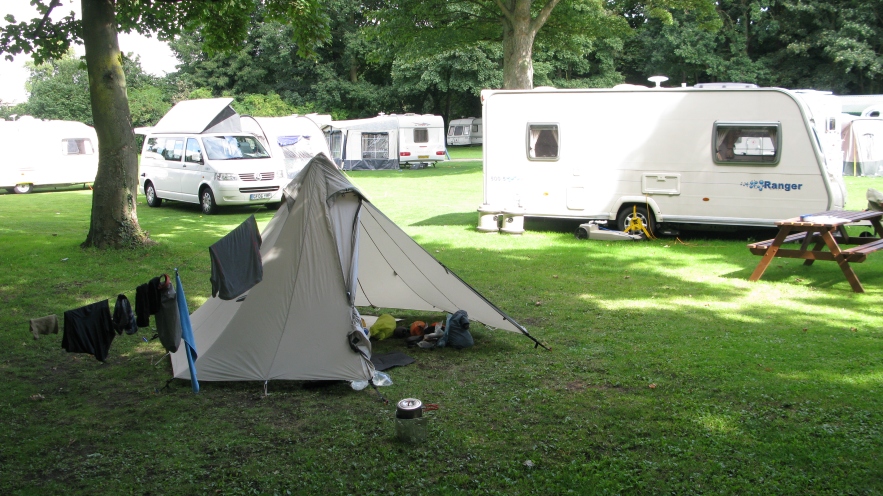 If not wild camping, any convenient site was used. The genteel folk may not have been amused to find what was in their midst. Wiki-Up 3 on a caravan site, Wherryman’s Way, 2014

I love history and I am fascinated by my country and it’s past. The social fabric of these three great countries that I traversed over five months- England, Wales and Scotland are interlaced, yet separate and distinct. I experiencing both the best and worst that planning and serendipity placed in my path. I have an interest in geology and natural history. My route was both practical and fairly direct yet I also want to take in some of the best of countryside that is on offer. So while much of my route was plotted in advance I still gave myself leeway to explore; to take the high road if weather was fine and I was feeling good, or the low road if the rain had set in or I was feeling lethargic. 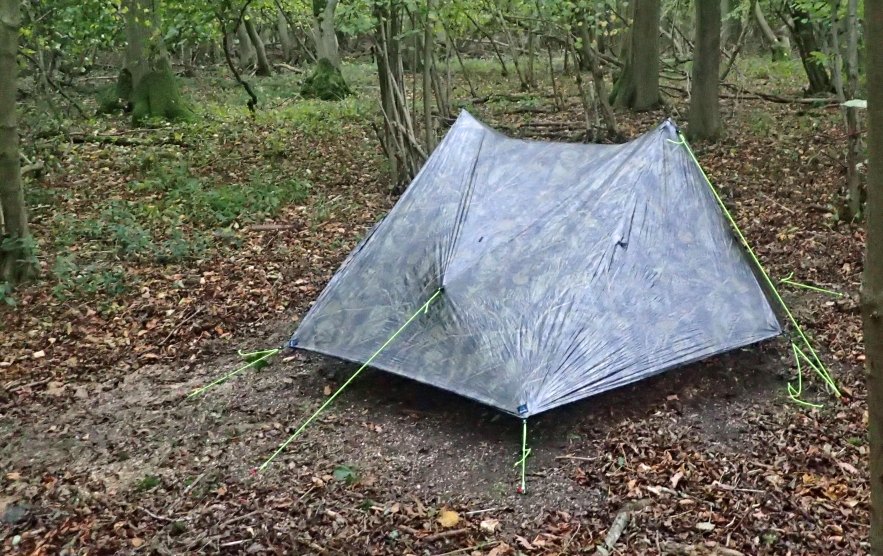 Wild Camp with Z Packs Duplex on the Icknield Way in 2017. This is the shelter Three Points of the Compass used on his 2018 hike

My walk began in torrential rain at the start of the South West Coast Path. From Poole, I walked toward the Lizard, the most southerly point of mainland Britain. That was my First Point of the Compass. I then walked toward Land’s End and continue following the north coast to Minehead where I struck inland, taking in Glastonbury and Bristol before swinging back round to follow Wales north along Offa’s Dyke Path for its total length. Crossing into England, I worked toward the spine of England and followed a mixture of trails to Jedburgh during the hottest summer experienced in the UK in decades.

Scotland was a challenge that I was now prepared enough to handle, if not with ease then certainly with confidence. The West Highland Way saw me to Fort William where I left any sensible route by seeking out the most westerly point in Great Britain at the unpronounceable Corrachadh Mòr. That was my Second Point of the Compass. Battling my way back to the Cape Wrath Trail through wild and beautiful country, I followed that to Cape Wrath where I then walked round to Dunnett Head (my Third Point of the Compass) via John O’Groats. So not only was it a wander to the three compass points but between these, also a LEJOG, or Land’s End to John O’Groats. 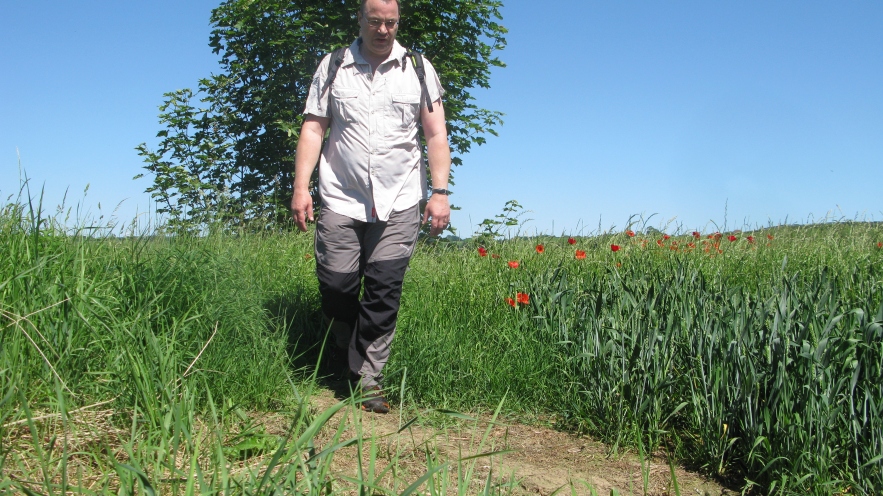