I have just returned from a fortnight’s family holiday on Fuerteventura. This is the second largest and the longest of the Canary Islands. I stayed in a large hotel in the centre of the east coast. It was to be a holiday of many parts. The primary aim was to rest from the rigours of work, to see some early sun, to get a bit of walking in and explore the most interesting sites, history and geology that the island had to offer, to discover flora and fauna never seen before and to, hopefully, get in a little bit of sketching. To this end, a modicum of space was found in the suitcase for a compact art kit that could also go into the day sack on days out.

I continue to not only work on my, woefully inadequate, artistic skills, but also to refine a lightweight art kit that can accompany me on longer walks, in particular my Three Points of the Compass walk in around a years time. I wrote last year of a lightweight art kit that accompanied me to Sicily in 2016. This was another opportunity to further drill down the equipment I will carry.

Three Points of the Compass urban sketching in Puerto del Rosario. Time was always limited and I attempted to work pretty quickly, at least before my spouse became totally bored and wandered off…

I will be blogging later in a little more detail on the specific materials I took with me and others that never made the cut, but for this trip, all I wanted was a simple little self contained pouch in which to keep most art materials together. Something that could be pulled out almost anywhere and provide me with a small, discreet and self-contained choice of medium. 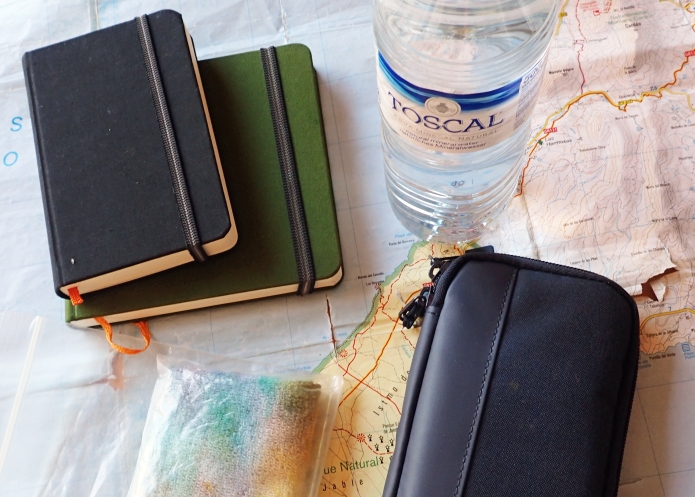 I took a small pouch containing the majority of materials, two small sketchbooks, a cotton wrist band protected in a baggie and all important bottle of water, the latter was for my hydration as I made use of a water brush for painting

Whereas I would normally wish to sketch directly into a hike journal, this wasn’t that sort of break, so I took two of my favourite little sketch books. One is a 3 1/2″ x 5 1/2″ (88mm x 139mm) that has somehow become my default sketchbook for churches, the other a square format 5 1/2″ x 5 1/2″ (140mm x 140mm) – though page sizes come in a little smaller, used for anything else. Both of these hand books are from Global Art Materials.

For such a small kit, I had a fair amount of choice and flexibility in materials

This is an exciting selection only recently developed by myself that is going to prove a little challenging for me to use, being much reduced from what I am more used to, so this trip was an excellent opportunity to try it out. My intention was to increase the quantities of each pigment in my small palette so that it was more useful on longer trips, but still offer good mixing capability. As it transpired, I did so little painting that I have not, by any means, fully explored its capability nor identified any faults. Though I have already noted the difficulties presented by such limited mixing space. You can see the seven small wells I have built into the lid. 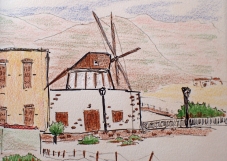 The small selection of coloured leads from Koh-I-Noor that I took with me allowed me to occasionally switch medium. This poor and scrappy drawing was completed in less than ten minutes whilst standing on the pavement waiting for a bus to hove into view. With just a few minutes to spare, the windmill opposite me in Tiscamanita was a superb subject that could not be ignored

To accompany this, I had a medium Pentel Aquash Water Brush. My lovely little Lamy Safari Fountain Pen was loaded with black Noodlers Bullet Proof waterprof ink, Pentel black ink brush pen (not used at all), Rotring Tikki Graphic 0.1 technical pen with pigmented waterproof black ink and a white Uniball gel pen. I simply cannot eschew my pencils entirely, so took one of the gorgeous Koh-I-Noor Toison D’Or 5900 clutch holders loaded with 2mm 2B graphite from Faber Castell. Despite there being a sweet little lead pointer in the cap of the clutch holder, I slipped in a 2mm lead pointer made by Faber Castell. To be honest, I should really have taken a pointer that would retain graphite slivers when sharpening, such as my Uni pocket sharpener from Mitsubishi, but I forgot it. As there was room in the pouch, I took a small, thin lead holder made by Acme for their spare graphite leads, but instead of their leads, I loaded it with the waxy 2mm coloured leads made by Koh-I-Noor (brown, blue, green, red and yellow). Also carried was a shaped eraser from Derwent and a small bulldog clip. All of this was carried in a zippered Lihit Lab Compact Pen Case.