Beside the MSR Windburner and Jetboil Flash that Three Points of the Compass pulled from the gear boxes to play with recently, I already have four other, mostly smaller, gas stoves that I could consider for my long walk beginning in April. There are two from Primus- a multifuel stove and a remote gas canister stove, also a couple of wee little canister top gas stoves.

Three Points of the Compass and family car camping in Exmoor, 2009. One or both remote Primus Stoves were used on these trips. Primus Omnifuel running on White Gas on left, Primus Gravity running on canister gas on right. Both of these stoves were capable of ‘proper’ cooking, hence the chopped mushrooms in the foreground. Note that we had a penchant for the folding Orikaso ware at that time, the earlier popper type not seen here were the better option

This stove has been taken on many car camping trip over the years as my family grew up but has never accompanied me on any more than the odd day hike. The Primus Omnifuel (8000 BTU) is an almost bomb proof, well made stove that can also be disassembled in the field if necessary to service or repair. While it is actually a multi-fuel stove, capable of running on petrol, paraffin or even diesel, I have tended to use Coleman Fuel (White Gas) which is a very pure 100% liquid petroleum naphtha. If not Coleman Fuel, then I have run it on canister gas, with which it works very well. It is a very stable, low to the ground stove with three wide pot supports. It is possible to get a fine simmer or roaring flame with the control knob, it sounds like a rocket when fully on. This type of stove should NEVER be used inside a tent as the fireball occasionally produced can be ‘interesting’. There are newer, more compact versions of this stove available now but mine works fine. While I have no idea what the new versions weigh, mine weighs a whopping 352g. It is a terrific stove but I don’t think this monster will be coming with me on my long walk later this year.

Primus Omnifuel 3289 in use with gas canister. Note that the jet has to be changed for use with liquid fuels (a simple task) and the fuel bottle and pump are not shown in this image

My other Primus stove, that has been taken on similar car camping trips, a couple of cycling jaunts and a lone canoe trip, is the Primus Gravity 3279 (10500 BTU). This is a slightly more spindly, less robust product than the Primus Omnifuel. Factors that are reflected in its lower weight of 261g. This despite it also having a preheat coil, four wide pot supports and a piezo ignition. The latter is as useless as all of these eventually are, every piezo ignition I have ever had has eventually failed.

The stove has a good fine control knob and the legs can be pinned down to the ground if desired, though it is a very stable affair that will handle large and heavy pots. The legs on this stove fold up and it is a less bulky affair than the Omnifuel, however you could never says it packs small. This stove has always worked faultlessly for me and I have never felt the need to dispose of it despite it rarely seeing the light of day in recent years. There was/is also a Primus Gravity MF version that can burn multi-fuels, not the model shown here. Again, there are newer variants available today. 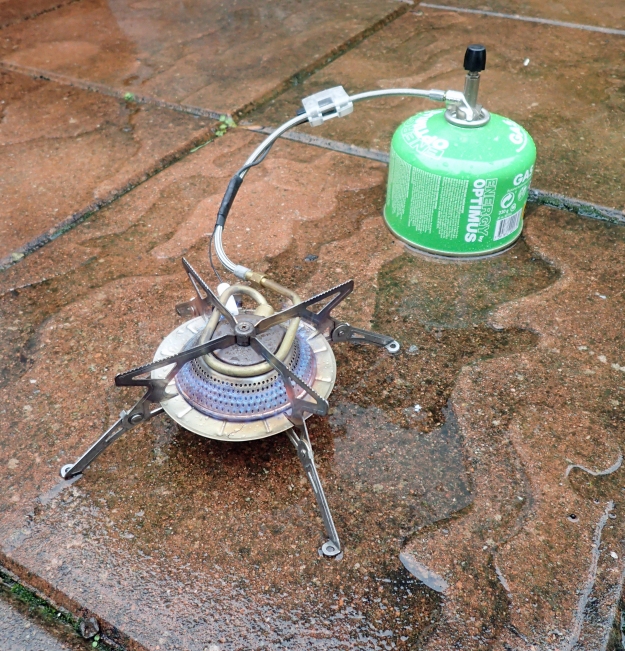 While excellent products, I really want to keep the weight and bulk of my stove of choice down. It was time for me to pull the smallest gas stoves I own from by gear boxes and see what they have to offer.

MSR know their stuff when it comes to making good stoves. It is no surprise that I have one of their Pocket Rocket stoves. I held off for many years from buying the original Pocket Rocket. Not for any particular aversion, it was just that I was undecided as to whether to buy the MSR Micro Rocket instead. I dithered so long, that in the interim, MSR took the best features of each of their canister top stoves, combined them, and released the Pocket Rocket 2. 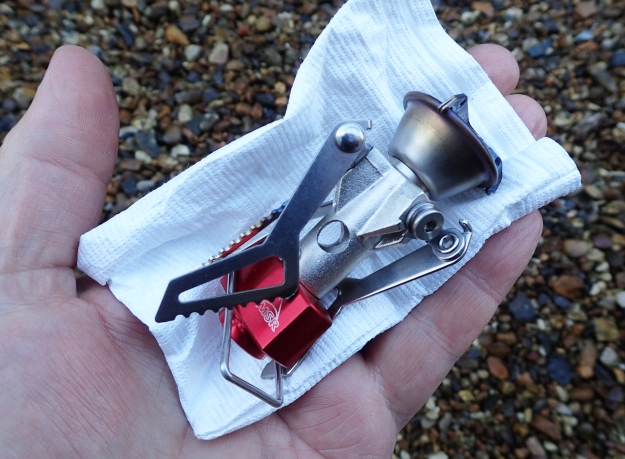 I purchased my Pocket Rocket 2 in 2016 so have had very little opportunity to put it to use, relying instead, on my various meths/alcohol stoves for my backpacking trips. That said, I have still managed to put it to use on a small number of occasions and have got on well with it. For someone who appreciates the unhurried silent manner of a meths stove, the apparent frantic haste that  a canister stove such as this presents means a complete rethink on my setting up process. Normally, I can get to camp, drop the pack, select and clear my pitch, tent up. Then put a boil on to quietly do its thing to one side while I sort out sleeping mat and extract my quilt to allow it to decompress and pull the trail shoes off and let the feet breathe a little. By the time that is done, I have water reaching a boil ready for a hot drink. With a canister stove, it deserves and requires undivided attention.

My favourite pan for some years has been the Evernew 900ml shallow pan. This wide bottom pan is a great size for one hiker and very suitable for the wide spread of flame from most meths stoves. With the tighter, narrower flame pattern of the Pocket Rocket 2 stove, for no other reason than curiosity, I have looked at some choices of pan in my gear set that could prove more functional.

MSR Pocket Rocket 2 with MSR 900ml Titan Kettle. The pot supports are wide enough to provide a firm support to the pan. Note the directed flame. Less spills from the sides of the pot as lost heat, but care has to be taken so as to not burn any food in the centre of the pot

The 75g Pocket Rocket 2 comes with a handy little plastic holder with flip top lid, sized just right for the stove and provides great protection from knocks etc while in transit. However this holder alone weighs an additional 31g and reduces the practicality of packing the stove inside many pots or pans. Instead, I either wrap the stove in a small cloth, Lightload towel etc. or inside a little home made 1g tyvek baggie. 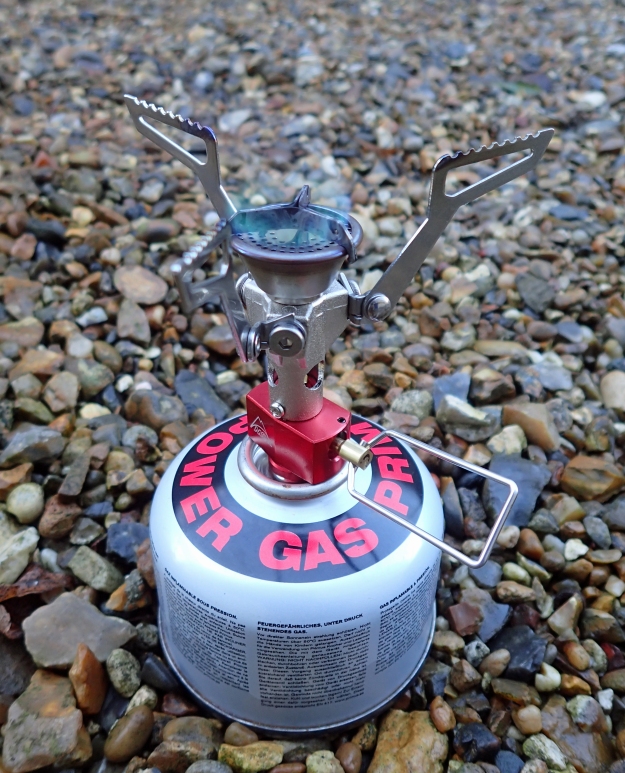 While the Pocket Rocket II is a pretty small piece of kit, I snapped up one of the Chinese made BRS 3000T stoves when I heard of them just to try one out. I could afford to take a punt on one of these as it cost me less than a tenner on eBay. This is truly tiny stove measuring around 35mm x 50mm when folded or some 63mm x 90mm maximum width when unfolded, including the protruding wire valve control. I doubt that it is actually possible to get much smaller or much lighter than this and still be a functional item. 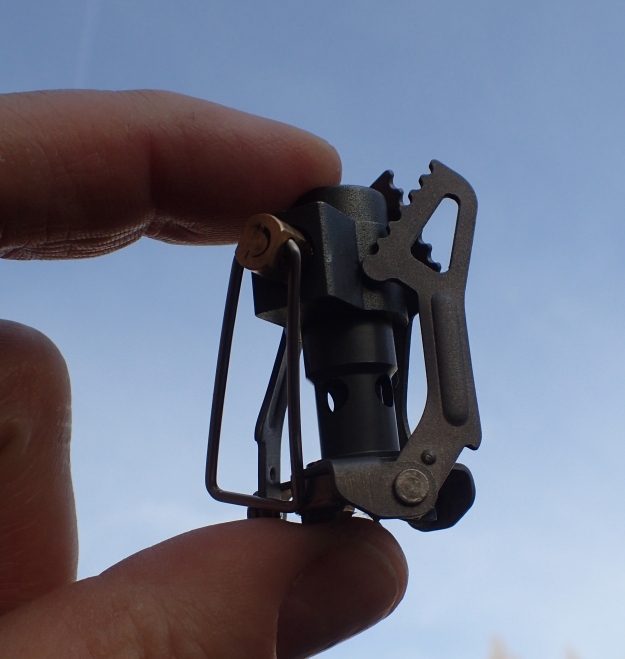 The BRS 3000-T is advertised as being made of titanium, but there are other metals in its construction as well. The design is such that it weighs just 25g and it comes with a little nylon carrying pouch that adds a further 2g. 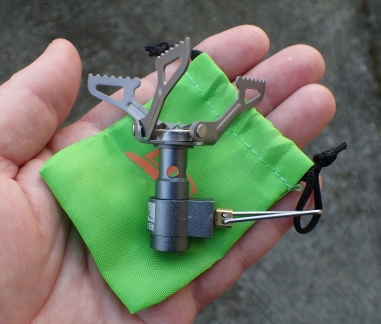 The BRS 3000-T stove is delivered from China in simple packaging and comes complete with a little carry pouch. This stops it rattling when carried inside a cook kit

The stove is perfect for carrying inside a titanium mug along with a small gas cartridge for midday hot drinks or food on day hikes. That said the pot supports on this ‘Bumblebee’ stove are pretty narrow and I have to take care to ensure my pots sit on it square. I am not over keen on using this stove with my wider pans. While the largest pot I use is around a litre, I wouldn’t like to use anything larger, or more accurately, heavier on the pot supports. I am loathe to use it on longer, multi-day hikes but I am well aware that many hikers have used one of these stoves for weeks on end with no problems other than struggling to work with it in windier conditions. Some users have also experienced problems with the pot supports bending.

The flame from the BRS 3000-T is pretty narrow and directed. The pot supports are close to the flame and obstruct and flare this quite badly, the small titanium supports glow red even with quite modest flames. Some users have reported that the supports soften as a result with disastrous results. The pot is a simple 1 litre titanium pan with no lid or handles from MSR. This 140mm wide pan has an indentation on the underside in which the pot supports fit and centre well

I think the BRS 3000-T offers around 9200 BTU, it is advertised as giving out 2700W but works better and less frantically with less flame spilling up the sides of pots if not on full, which does, of course, mean a little longer to boil. But speed isn’t everything, hence my affection for meths/alcohol stoves over the years. 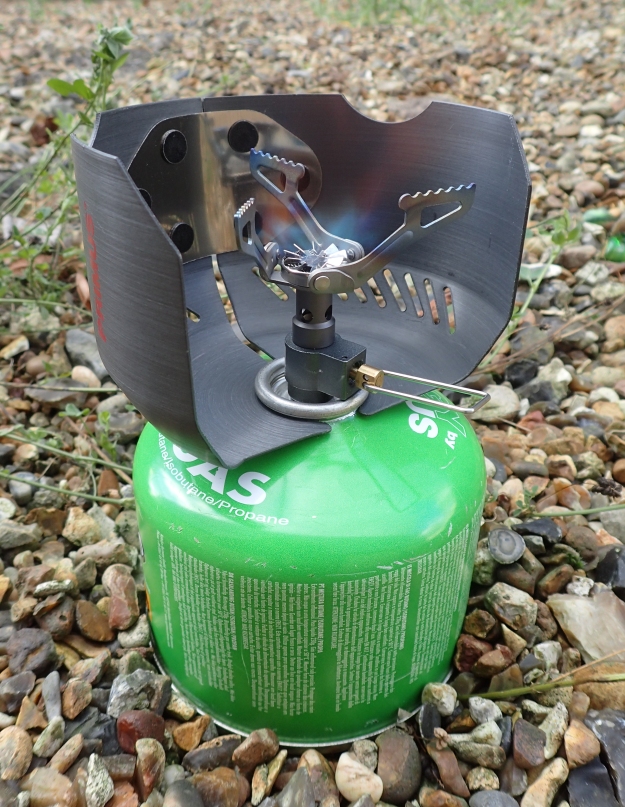 The BRS 3000-T stove does not perform well in even light wind. It pairs well with the 68g Primus windscreen but requires quite a narrow pot to prevent dangerous overheating of the cartridge. This windscreen inverts when not in use and nests around a 240g/250g gas cartridge

There are alternatives- The BRS 3000-T is almost certainly modelled on the the 45g titanium Fire Maple Hornet. This is a stove that also has its fans, or one of the badge engineered copies such as the Alpkit Kraku, Robens Fire Midge or Olicamp Ion. You pays your money and makes your choice, they are all the same stove, which is no bad thing. But I don’t own any of those stoves. I see no reason to buy another stove when I can use the excellent Pocket Rocket 2…

… or the MSR Windburner!