Map measurer, opisometer, curvimetre, mile-o-graph, meilograph, chartometer, call them what you will, in the era of digital mapping, who uses such an antique analogue object today? Well, Three Points of the Compass still does. I have used a simple little map measure for decades. The  cheaply made one shown above, made in Western Germany,  has been pulled down off the bookshelf hundreds of times over the past twenty years when planning routes. It replaced another that gave equally lengthy service but had eventually died the death.

It never goes on actual walks with me. Though I am one of a seemingly dying breed who still likes, appreciates and takes hard copy maps with me on trail. If I want to measure a distance on the map while sitting in a tent, pub or hostel lounge, I either guesstimate, infrequently use a roamer scale on my compass baseplate, a strip of paper which is then measured against the scale at the bottom of my map, or, most frequently, I use a length of thin cordage. The small hank of 2mm yellow cord in the image below is one of the two I carry for attaching my Katabatic Palisade quilt to my sleeping pad. 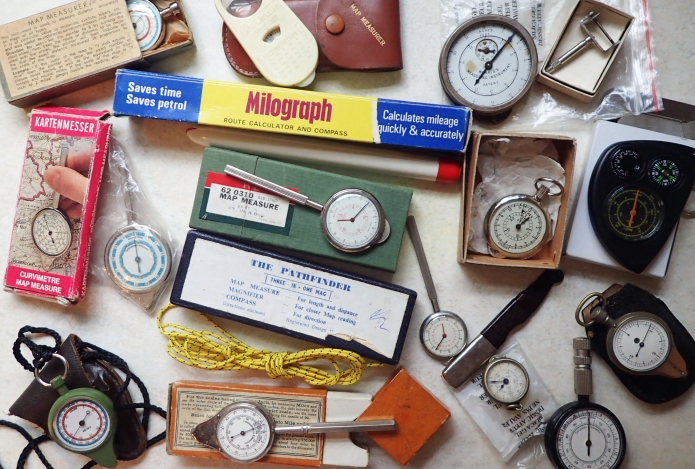 Assortment of map measurers from my collection. Some cheap and nasty, some peculiar, one or two beautifully made and uncommon 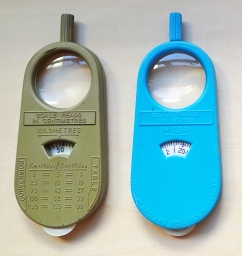 Map measurers can be sweet little pocket watch style affairs that were tucked into the waistcoats of the gentry, or simple little wheeled opisometers, like the one below,  sold in the likes of Stanfords map shop in the mid-twentieth century.

They could be made of plastic, bakelite or metal. Have handles incorporating bone or ivory. Cheap versions were given away at petrol stations, or combined into all-singing all-dancing measurer/compass/thermometers made in China by the thousand. That said, they still work. The cheapest will do the same job as the most expensive gold plated measurer ever made. They even make incredibly expensive digital versions today. I look on them with dismay, much preferring my little analogue measurers. 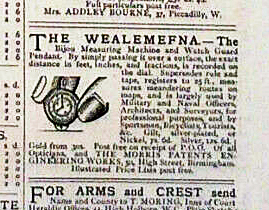 The idea of map measurers is an old one, probably as old as ‘to scale’ maps themselves. Beyond simple calipers, early map measurers, or opisometers were very simple affairs indeed, little wheels on a threaded bar that could be pushed along a line. More expensive designs that incorporated a dial scale didn’t really appear in any great numbers until the later nineteenth century.

Anyone that required a map was also using a map measurer. The military use them, sailors use them, motorists use them, town planners and draughtsmen use them, and still, just a few walkers use them. You run a little wheel along a route, a path, a road, a river, a line on a drawing, then either read off the result or measure against a standard.

Box for ‘Self-Registering Rotameter’, provides detail on scale and how to use

Map measurer by Henri Chatelain, with “Quarter-Inch” Ordnance Survey map to The Border, 1935

Along with thousands of other hikers I rely very much on my online O.S. Maps when planning my routes. This will give me not only distance but also daily elevation. However I still like to use a map measurer on my paper maps when I can. It forces me to look at the terrain, the twists and turns, the type of country being crossed- across bogs, through woods, traversing moorland, traipsing through the backstreets of towns.

I won’t go in to any great detail on map measurers here. There is an expanding page on my website that gives more information. Over the years I seem to have built a bit of a collection of these little devices, just a small handful of which are shown above. There seems to be a dearth of information on these online or in print form. Perhaps it is because they aren’t that interesting, just to the likes of me and one or two other like-minded souls. So I have decided to share just a few from my collection with you- good reader, over the next year. Twelve, one a month, beginning January. I bet you cannot wait…

The ditty bag/repair kit that Three Points of the Compass carried on the Cape Wrath Trail in 2018. The hank of 2mm cord was often pulled into use as a simple map measurer when considering alternative routes due to weather or resupply necessity.

Three Points of the Compass has a closer look at four lightweight powerbank options from Nitecore
Gear talk: Nitecore powerbanks for lightweight backpacking

Map Measure of the Month: the Enbeeco “opisometer” No. 102

This is a ‘middle-of-the-road’ map measure masquerading as a quality […]
Map Measure of the Month: the Enbeeco “opisometer” No. 102

Three Points of the Compass pulls down and shares four books from his library. These cover statues and monuments to be found in London
A hikers library: London’s statues, sculptures and monuments

Trail talk: a night wander of the Jubilee Walkway in search of elephants

Three Points of the Compass walks London's Jubilee Walkway, this time at night. I was looking for statues and public works of art, but found partying football fans and elephants
Trail talk: a night wander of the Jubilee Walkway in search of elephants

Trail talk: how to use the sun clock on the Silva Ranger SL compass

Three Points of the Compass welcomed a recent delivery- a stack of notebooks waiting to become trail journals. A look at their respective merits
Trail talk: Huzzah!- new notebooks delivered
Loading Comments...
%d bloggers like this: