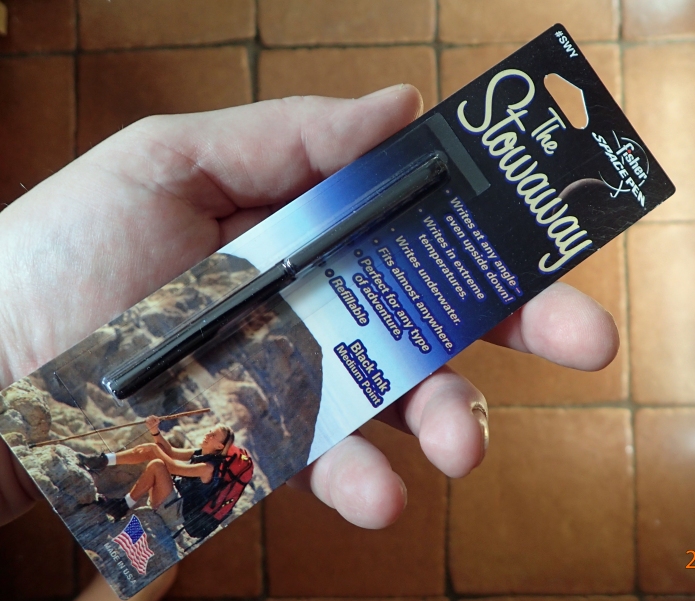 It is very easy to become a gram weenie, obsessed with shaving off the grams. Almost each time I shoulder a pack at the start of a trip, I give momentary thought to what can be left out next time. However that is not the time to be addressing the issue. I believe it is by keeping a list of what is taken and giving honest retrospective thought on the return as to what was actually used is one of the best ways of lightening the load next time.

The largest savings in weight are always going to be by addressing the ‘Big Three’- Shelter, Sleeping and Pack. True advantages can be made with those. But by constantly being aware of the opportunity to replace and reduce where appropriate a steady overall reduction can be achieved with little or no loss of function.

In search of the perfect pen…

I carry a pen. I like to keep notes, so I also carry a small journal. I’m no great fan of the Rite in the Rain style so take a 9cm x 14cm Moleskine notebook. It is, of course, perfectly possible to supplement this with a cheap (free?) mini biro from Argos. But there are far better options available.

For years I have used an Inka pen (above). It weighs 17g including the 2g split ring that can easily be dispensed with. Mostly constructed of carbon fibre and 304 stainless steel, its dimunitive size (85mm) when ‘dismantled’ opens up into a full size pen (128mm). The aluminium shaft is 10mm diameter and the lower part 9mm diameter. The pen comes with a Delrin stylus that I have never put to use. I wish sometimes it was fitted with a mini highlighter pen instead as that would be much more use. It writes pretty well but I am frustrated in only having found blue ink refills for the pen. The 600m write length from the tiny ink cartridge is a bit ambitious I reckon, but there again, who goes round measuring the length of their writing. All we want is a cartridge that will last the length of a trip.

Inka pen in the hand

For short or quick notes, often all that is needed with the Inka pen is to pull out the actual pen section from the shaft and use the short section as it is, rather than construct the whole length pen.

The titanium variant of this pen has long been on my wish list, but I have never bought it as it is ridiculously expensive. Many is the time it has made it to my cart, on-line, only for me to drop out at the last minute, muttering to myself ‘how much? for a pen!’

Inka now make a pen made from carbon fibre and polycarbonate, a few grams have been shaved off as a result of the materials choice and it only weighs 11g. However, pens are a personal choice and I don’t like this newer pen. It again comes with a useless (to me) stylus. In common with my earlier Inka, it comes with the means to fasten it to ‘something’, the steel split ring on the earlier pen has been replaced with an equally useless (to me) karabiner* clip. And blue ink again, why always blue, I want black. 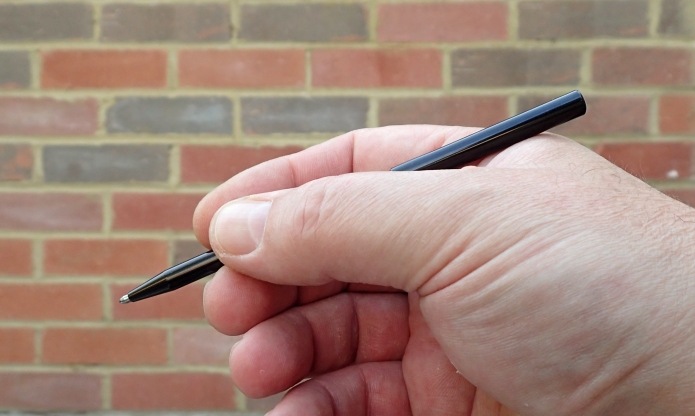 So recently I purchased a much more modest affair. This is, as far as I know, the smallest and lightest of the Fisher Space pens. The aluminium Stowaway weighs a paltry 5g and this is achieved mostly by its diminutive proportions. Fisher do make the Trekker Space pen, but that comes in heavier than the Inka. With my preference to only replace kit with lighter options where possible, that is why I went for the Stowaway. It is 100mm when stowed and 130mm when constructed for use. Construction is a far simpler affair than the Inka too, pull the cap off and slot it on the other end, that’s it.

Both pens in the hand, both are pretty small in stowed configuration

I now get the black ink I prefer. The pen is pretty thin in the hand, there is no denying it. The shaft is only 6.5mm thick. I have heard of some people heat shrinking electrical tubing on to the pen to make it slightly wider and more comfortable but I will see how I get on with it as it is for a while before trying that wheeze.

Both pens will write in ridiculously cold or hot conditions, upside down and in the wet, there is no danger of either cartridge suffering from ‘exploding’ or leaking either as they are hermetically sealed and pressurised. Some people claim that cartridges cannot be changed in these pens but that is not so. Simply press down firmly on the nip tip on a firm surface and they pop out the other end. Replacement is just as simple, slide in the cartridge and press home.

Despite both cartridges being pressurised, the Inka (top) does not deliver as smooth and consistent a line as the Fisher (bottom)

There is another option…

Notebook pencil, with 0.3m of gaffer tape wound round it, it weighs 3g

The old story goes that hundreds of thousands of dollars were spent by NASA in the 1960s developing a pen suitable for the space missions. Not quite true, the costs involved meant that US Astronauts used pencils, just as Russian Cosmonauts did. It was only later that the privately developed Fisher Space pen was adopted for the Apollo flights and manned Russian space exploration flights.

But, taking a leaf from their book. A simple pencil will probably suffice for many, if not most, desired tasks. There is no need to take a full size pencil either, a stubby little affair will mostly do good service, and there isn’t much that is lighter than one of these…

* Some people get a little hung up with spelling of karabiner (Bruce, I’m looking at you). You will, indeed, see me straying off piste with my own spelling on occasion: carabiner, caribiner, karibiner et al. But the important thing to remember, is, nope, forgotten…