A library for ornithologists…

When I used to go regular ‘Birding’ in the 1980s and 90s, there were few specialist guides generally available on one of the most exciting groups of birds to be seen- Raptors, or birds of prey.

My pals and I were especially taken with one particular volume- there had never before been anything like Flight Identification of European Raptors by Porter, Willis, Christensen and Nielsen and there was nothing else like it being produced either. Most guidebooks showed their raptors sitting on a branch, but that wasn’t how we saw them. Walking the North Kent marshes, the reedbeds and floodplains of southern England or the East Anglia coastline, it was invariably a Merlin skimming low over the ground, a Sparrowhawk shadowing a murmuration of Starlings, a Hen or Marsh Harrier quartering the phragmites or the sudden appearance of a Peregrine that put a thousand waders to flight, that was how we saw our raptors. The monthly journal British Birds is to be congratulated for having persuaded the authors to produce a series of eight articles on the identification of European Raptors, which subsequently formed the basis for the first edition of this book. 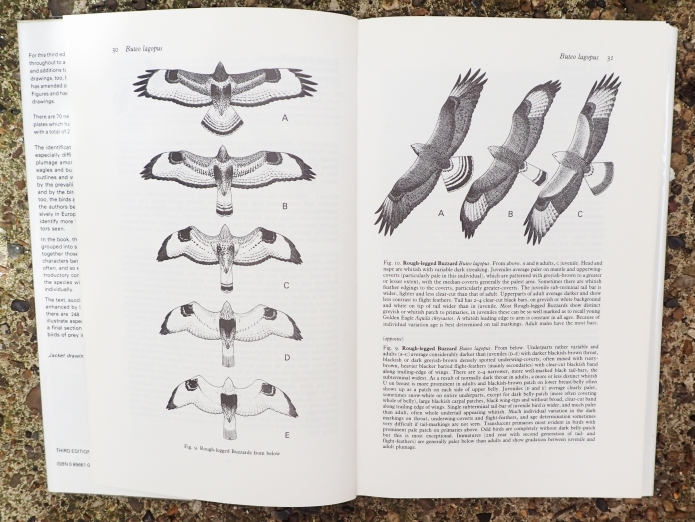 Birdwatching on the North Kent Marshes in winter meant fervent hope that a Rough Legged Buzzard may have wandered over from Scandinavia. Flight Identification of European Raptors was invaluable for pulling these birds out of the more commonly encountered Buzzard, especially with the considerable variations in plumage encountered with the latter species

All of the bird monographs produced by Poyser are excellent, but I especially like those they published on raptors. The volume on population ecology puts to bed the nonsense spouted by those who persecute birds of prey, either for taking Grouse on the shooting moors, or the many idiots who blame the reduction in song birds numbers in their garden on the resident Sparrowhawk. 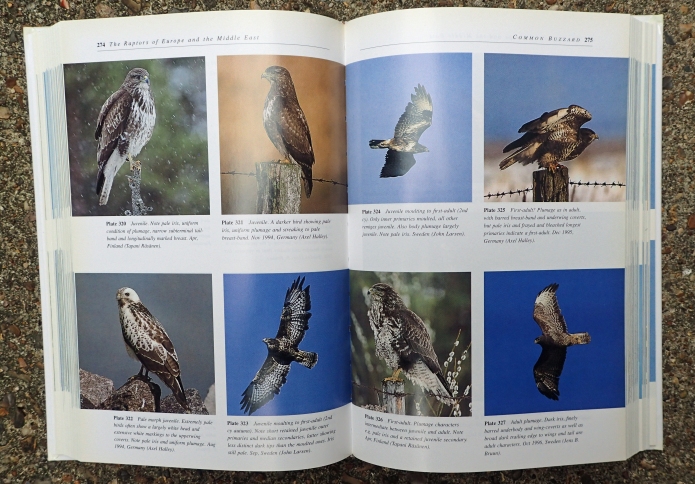 The Raptors of Europe and The Middle East by Dick Forsman was a momentous stepping stone in the publishing of effective field identification guides. Still containing good information on each species, the book is beginning to show its age with the photographs included

Flight Identification of Raptors of Europe, North Africa and the Middle East by Dick Forsman

In 1999, one of the leading raptor experts produced a new ‘definitive guide’. Dick Forsman included colour photographs in his The Raptors of Europe and the Middle East (above), a vast improvement on the fuzzy black and white photographs that accompanied the drawings in the previous book from Poyser, twenty-five years earlier. Forsman included a lot of perched birds, as well as in flight, in his book. Probably due to a lack of decent available sharp images.

Digital photography has changed everything though and seventeen years later, Forsman again approached the question of identification of raptors with his Flight Identification of Raptors of Europe, North Africa and the Middle East published as a Helm Identification Guide by Bloomsbury Publishing in 2016. This is a superb volume and, I believe for the first time, there is good coverage of sub-species too.

I never did get to Falsterbo or the Straits of Gibraltar to observe mass migration of birds over that narrow bit of sea but have continually missed having a decent flight I.D. guide to raptors every year when I holiday and walk on many of the islands in the Mediterranean and elsewhere. These various tomes are simply too heavy and bulky to cart along with me. Hence my moving slightly away from adding another volume to my bookshelf.

Three Points of the Compass purchased the Kindle edition of Dick Forsman’s The Raptors of Europe, North Africa and the Middle East and uploaded it to my android phone. This also offers the facility to zoom in on images

One or two books on knots and their uses on the hiker's bookshelf will not go amiss. These are mine and there is not a bad volume amongst them
A hiker’s library: Knots