Who doesn’t love a tree? You can climb it, sit in its shade, even burn it once it is dead. Or simply admire it. A dark forest, particularity if mono-culture, can be an oppressive place but a mixed deciduous-coniferous wood is a delight- Scrappy little pines bent under a constant wind, the rotting bulk in a carr, the gentle Willow trailing into a flowing river, or one of the great sights of England- a magnificent Oak sitting alone in a field. All pretty special, but trees can be all the better appreciated if we can put a name to them.

Jarrold & Sons published four small guides to trees. Only two that I purchased as a young lad have survived the years. Dating from 1973 and 1974, each is still a perfectly serviceable guide. As usual, any book from the Shire stable is well written and authoritative, their book on Willows covers eighteen species native to Britain

You don’t need much in the way of guides for trees, particularly if you only want the basics. Not everyone wants to split the Oaks apart or tell one Willow species from another. But spot the reddish boughs of a pine, the flaking plates on the bark of a city Plane or the nut husks in the leaf litter beneath a tree and you are getting somewhere.

The two books shown in the featured image have stood me well as reference works. Roger Phillips had, by the time his Trees in Britain volume was published, honed his skills as both a photographer and botanist well. Collins have updated their trees field guide a number of times but I have never felt the need to replace my perfectly serviceable guide from Alan Mitchell.

This is a good complimentary volume to a guide to trees. Published in 1994, Lichens of Trees is one of a series of booklets produced by the Department of Botany of the National Museum of Wales

Two small guides from Jarrold to tree species were amongst the very first slim books that Three Points of the Compass purchased with pocket money as a young teenager, I still have them.

If you do have any interest in trees, and I do encourage you to look a little closer at them, it rarely stops there. The dependent species that frequently enjoy a symbiotic mutualism with a particular tree species can be fascinating in their own right, none more so than the lichens, which are themselves, an obligate mutualism resulting from the combination of fungi and algae. OK, so look it up… 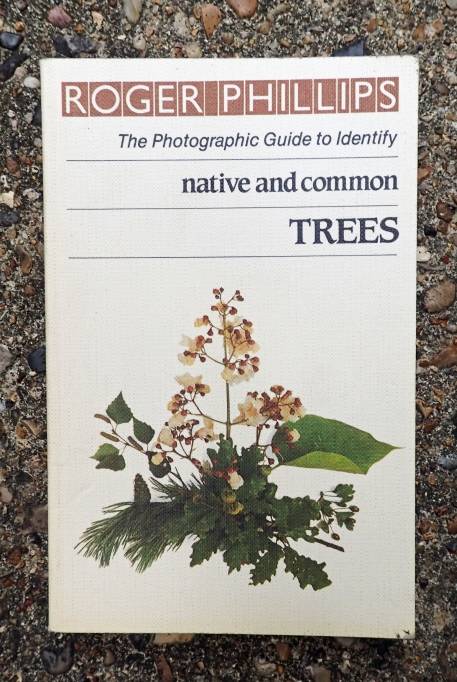 The large hardback photographic guide at the head of this page from Roger Phillips is simply too large to take into the field. However he has also produced some handy pocket sized guides, amongst these was this guide to native and common trees, covering 92 species