A library for botanists…

‘A Generall Historie of plantes’

After identification manuals and handbooks, ecology guides, accounts of rare and unusual flowers, where should the botanist turn to next- How about a guide to what the ancients thought of as the various ‘vertues‘ of plants for food and health? 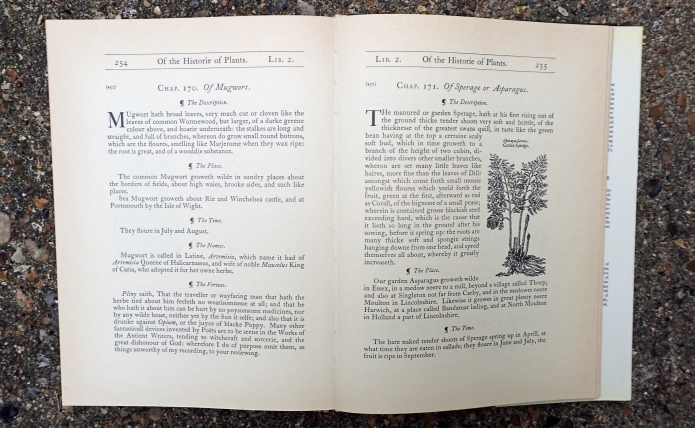 Mugwort- ‘That the traveller or wayfaring man that hathe the herb tied about him feeleth no wearisomnesse at all; and that he who hathe it about him can be hurt by no poysonsome medicines, nor by any wilde beast, neither yet by the Sun it selfe’- dubious advice from Gerard

Apparently the longest book in print after the Bible, Gerard’s Herbal is a fascinating concoction of fact, local lore, nonsense and downright dangerous advice. John Gerard was an Elizabethan physician, herbalist and botanist who tended Lord Burleigh’s gardens. In 1597 he published his famous Historie of Plantes and this informed and led the way for just about every herbal that followed. This is, of course, to ignore the fact that Gerard heavily ‘borrowed’ much of his work from others, particularly that of Rembert Dodoens. The woodcuts for the drawings were widely sourced and are probably amongst the finest of their day.

There have been a number of herbals published over the years, and countless new editions of some of the older ones. Some later editions have heavily abridged the original text or work, printing of the old plates has also suffered in some later volumes. You can pay a lot of money for a good, early copy, but with care, there are some more reasonably priced editions to be found. There are also good modern herbals though Three Points of the Compass has not really gone down that route, preferring a modern day botanists’ view on what our forebears had to say. For example, I grew up with David Bellamy on the television, his particular favourite herbalist was Culpeper. It is good that someone has time for these almost forgotten men. Bellamy tells us that apparently Culpeper himself, is buried somewhere beneath platform 11 of Liverpool Street station, London.

Potentially of more practical use than an old herbal, is Blooming Bellamy, the book that accompanied David Bellamy’s BBC series, first broadcast in 1993. It is still worth watching if only for the howlingly funny view of an ‘ageing botanist’ crawling around the feet of commuters on a railway station platform, while extolling the virtues of the plants to be found there

Book from my shelves:

Three Points of the Compass purchased a digital copy of Culpepper’s Herbal for diverting reading, though I am not sure I’ll be following much of the advice- “the juice of the leaves, or rather the roots themselves, given to drink with old wine, doth wonderfully help the biting of any serpents: and the root beaten with a little salt, and laid on the place, suddenly eases the pain thereof, and helps those that are bit by a mad dog”