Following my recent shake down trip on the Icknield Way, I decided to abandon my long term favoured meths set up for cooking and return to gas. I used gas, or canister, stoves for quite a few years but mostly switched to meths (or alcohol) a decade or so ago for the unfussy, silent, simple set up that these cook kits provide.

However I have to recognise that gas does work out the more efficient and lighter option over multi day hikes. So for my Three Points of the Compass hike next year, I am looking at my gas options. Not every option out there, instead I am mostly looking at gear that I already have  but have not used much in recent years for one reason or another. 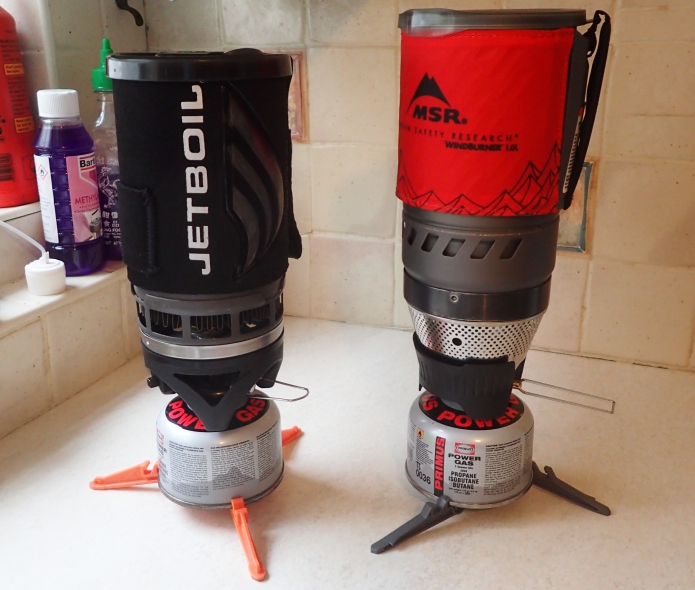 Jetboil Flash and MSR Windburner- two fantastically efficient options, but for boiling water only, not cooking

This weekend saw pretty dismal weather outside with most of the UK beset by storms, rain or snow. So I spent a couple of hours in the kitchen reacquainting myself with the Jetboil Flash and MSR Windburner. Both of these are integrated, all-in-one designs, everything packing away inside their respective pot. While ruthlessly quick at boiling water, attempt to do any cooking in these and you will come unstuck, which is more than can be said for the food burnt on to the inside of the pot.

The Jetboil is good but the MSR is, quite simply, an amazing piece of kit. It is probably the most efficient gas stove out there at present. It will bring half a litre of water to the boil on just 7-8g of fuel in just about any strength of wind. For that you need to actually get it lit first, which is no great hardship despite it having no piezo igniter fitted. Also, it is most efficient when using the actual integrated pot. I see that MSR are releasing the Windburner as a remote canister stove but not until next year. I believe the weight increases too. Instead, I have been looking at how my Windburner canister top stove performs when using the pot stand that is supplied with the Jetboil.

I won’t bother giving all the weights for the respective kits as that is out there on the web and no-one takes every component. The burner head of the MSR alone weighs 200g, so no lightweight, put the folding Jetboil pot stand with that and it totals 237g. At the very least, I have to add a pot (and probably a lid) and a fuel canister (and probably a canister stand). That said, I can still make a lighter set up with a lighter titanium pot or pan than when using the MSR Windburner pot.

The combination of the MSR Windburner and the Jetboil pot stand work well. There looks to be sufficient room between the pot stand and the radiant burner head to prevent dangerous stifling and overheating. Obviously it is less efficient in wind than when the integral MSR pot is fitted, but this set up permits me to obtain a simmer, something impossible when used with the 1lt MSR pot that slots directly to the burner. 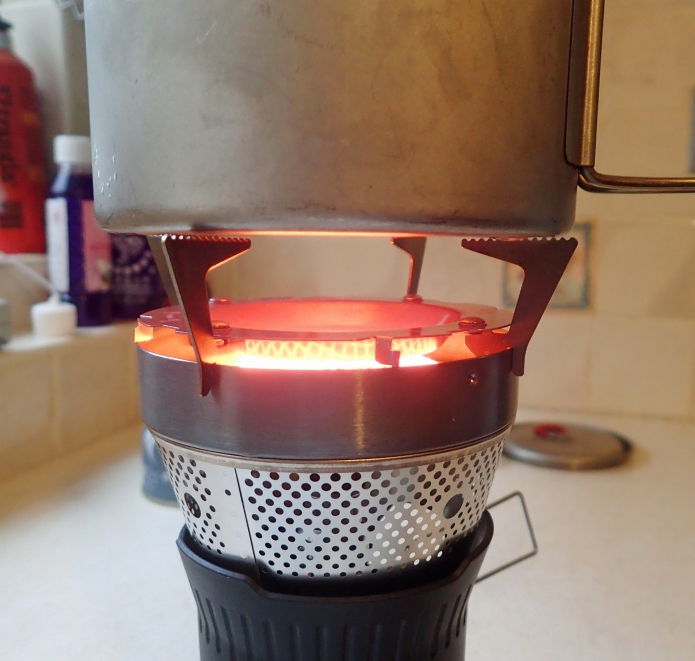 I tried it out with my old 128g MSR Titan Kettle first. This is a classic little titanium pot with a tight fitting lid. It comes with a pouring spout which I don’t reckon to be the most efficient. One advantage of this pot is that the MSR Windburner stove will fit inside (with lid closed) for storage and transport. However the Jetboil pot stand will not fit in also. The pot is 118mm wide and some of the heat from the stove is disappearing up the sides when in use.

The 140mm wide 900ml titanium pan from Evernew that I have used for the past few years is a better option on the Windburner/Jetboil pot stand combination, allowing less heat to slip up the sides, however the stove head will not nest inside the pan.

I think I am going to have to continue exploring my options a little. Time to look at the smaller gas stoves I have available and see if I prefer one of them.