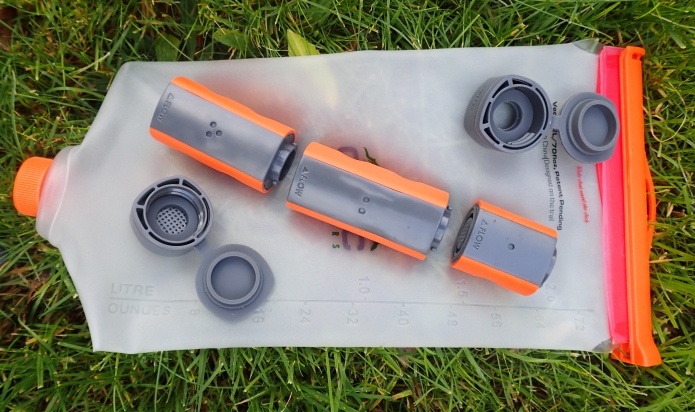 I write this over the festive season. During the weeks leading up to Christmas there have been numerous packages and packets arriving at home and workplace, containing various online purchases. Amongst these I was chuffed to finally receive a couple of items that I had supported months ago. I have had a couple of other projects that I have backed on Kickstarter fail miserably to come to fruition. While there is still forlorn and distant hope that progress may yet occur, I remain suspicious that I have been taken for a ride with them. That is not the case with these two items of gear- the CNOC Vecto water container and the MUV Survivalist water filter.

The CNOC Vecto is a two litre collapsible water container, with a wide opening at one end and a 28mm screw neck at the other. It is a tough product, weighs 74g and is my intended dirty water container, what I currently plan to use as a default bladder for collecting water prior to filtering. I have used a 1 litre Platypus up until now but have found this not only a tad small, but the small opening makes it more difficult to fill unless from a tap. The wide opening on the BPA free Vecto is a great improvement. It also makes it easier to clean the inside.

The only downside of receiving this item a week ago was that I had to go to the local sorting office to collect it. They wouldn’t release it to me until I had handed over £13.12 in customs and admin fees. Not a happy bunny…

My previous filtration system, this incorporates a Drinksafe filter

My previous water filter was from Drinksafe. This has been fine for me for years and I have never felt the need to switch to a Sawyer, either original full size or the Mini, as I could see no advantage to be gained.

As a UK backpacker, I have long had concerns over the ability of a filter to clear water of not only viruses and bacteria but also heavy metals and chemicals. This is an increasing problem with agricultural run-off into the streams and rivers from where I can gather water. Not so much a problem in the wilds of Scotland but a real issue in lowland England where I do a lot of my hiking.

Overkill mode- all component parts of MUV filter joined together

I backed the MUV water filter on Kickstarter back in June 2016 and wrote about it then. Eighteen months later, it was deposited at the local sorting office. I was drawn to this product by the modular construction and the ability to also filter heavy metals such as iron and lead and chemicals such as fertilisers, pesticides, and diesel fuel.

I recognise that if I take every part of this filter, it is then a heavier option than my previous choice. My current intention is to use this filter on my Three Points of the Compass walk commencing 1st April next year, by the time I hit the north of England I can send the MUV 1 part home, followed by the MUV 3 section once in Scotland. Unless I decide on a lighter set up that is. 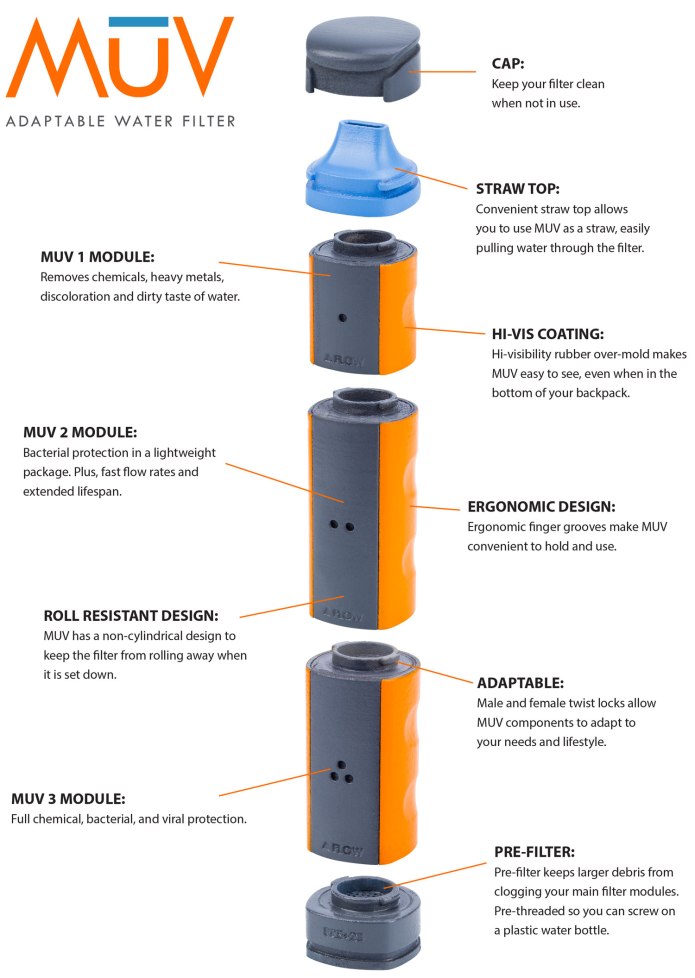 The filters are what they are and their weight is the penalty it is. These are dry weights, which will, of course, increase once water saturated. I have replacement pre-filters in my ditty bag which do not even register on my scales. But look at the weight of those two threaded ends- 19g each, of which each rubber cap weighs 7g, 14g total. The plastic and rubber cap to the straw cap weighs 8g. If I do settle on this system, I’ll have to consider if I want to include these as there is a 22g weight saving to be made there, how anal do I want to be…

A possible gravity filter system incorporating CNOC Vecto, MUV filer and Evernew bladder. I may have to include a section of hose to reduce the potential strain

I am still considering what other elements to take for my water carry and filter system. The picture at the top shows my probable set up, or at least something close to what I shall eventually settle on. That is, a bottle, bladder and filter.

The current filtration system I am looking at is comprised of the complete Survivalist MUV filter, two litre CNOC Vecto, two litre Evernew flexible water bottle, 850ml Smartwater bottle and a short section of hose with 28mm threaded ends. Almost five litre capacity, not something I am going to be carrying all day on the trail in the UK, but useful for end of day camp.

I am very pleased with both Vecto and MUV filter. I have yet to use either in anger but reports from other backers are already good and I have high hopes.

Replacement elements of the MUV water filter can be purchased independently

Map measure of the month: the Vistascreen Pathfinder

Trail talk: The ‘Ramblers’- a part history, through their badges

Since their creation in 1935, the Ramblers' Association has undergone various revamps. This is a glance at how the organisation has mirrored their changes in brand.
Trail talk: The ‘Ramblers’- a part history, through their badges

Many of us will have managed to fit in a few weeks of backpacking this year and some gear might have been having a rough time of it. Beside cleaning, re-proofing and condition checking, think about including an inspection of the O-rings fitted to gas and multi-fuel stoves.
Gear talk: O-rings- check ’em!

Three Points of the Compass looks at lightweight tripods for use with phone or camera on trail
Gear talk: mini-tripods

Map measure of the month: HB Curvimètre ‘Model No. 54M’

HB Curvimetre 54M- 'for the fast and precise measurement of lengths, straight or curved lines- on plans and drawings'
Map measure of the month: HB Curvimètre ‘Model No. 54M’
Loading Comments...
%d bloggers like this: