The Victorinox Classic is well named, it is exactly that- a classic. Reputed to be the most purchased knife in history, it combines the trinity of most useful tools. Blade, scissors and nail file. If you have the SD version of the Classic, then you also enjoy the handy little 2.5mm flat ScrewDriver tip to the nailfile instead of the nail cleaner. Away from the lovely thin Alox scaled versions, the more usual Cellidor scaled Classics also come with tweezers and toothpick.

Just 58mm in length and around 21g, the Classic is small, light and ideal for hiking. So useful is it that I EDC a little white scaled Classic SD, given to me as a present, on my work keys. This will handle most day-to-day tasks. However, Three Points of the Compass feels that there are other 58mm Victorinox knives that offer greater functionality with very little weight penalty.

Looking beyond the little 58mm knives, some might feel that it would be even handier to have just a little larger blade, and just a little larger pair of scissors. If that is you, then Victorinox have you covered with the Ambassador. Shown above, this knife is from the, very limited in range, single layer 74mm models that Victorinox have released.

Blades of 58mm Classic and 74mm Ambassador compared. For just a little longer knife you get a lot more capable blade 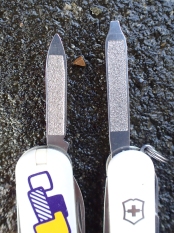 Surprisingly, the nailfile on the Ambassador is smaller than that on the Classic, though it is still a capable tool

Found with or without a keyring, the Ambassador doesn’t have the wide range of variants that the Classic has offered. I don’t really know why there aren’t just a few similar alternatives. Is a pen provided as with the Signature, or a little LED light in the scale as with the Swiss Lite? Sorry, no. There is a fairly uncommon alox scaled version called the Lady Victoria and that is about it.

The Ambassador is a little longer than the Classic when closed, 74mm instead of 58mm, and a little heavier- mine weighs 34.6g. For that you get a knife that is more comfortable in the hand, particularly for those with larger hands. It is also quite a thin knife, just 9.5mm. More importantly, the drop point blade now provides 46mm of cutting length over the Classic’s 33mm. The scissors are noticeably beefier than those found on it’s baby cousin too, though still small. The scissors on the Ambassador have cutting blades around fifty per cent longer. Scale tweezers and toothpick are the same in both knives and are interchangeable. Perhaps surprisingly the nailfile on the Ambassador is actually smaller than that on the Classic. It only comes with a nail cleaner tip, there is no SD version. But the nail cleaner tip will handle many little Phillips screws. 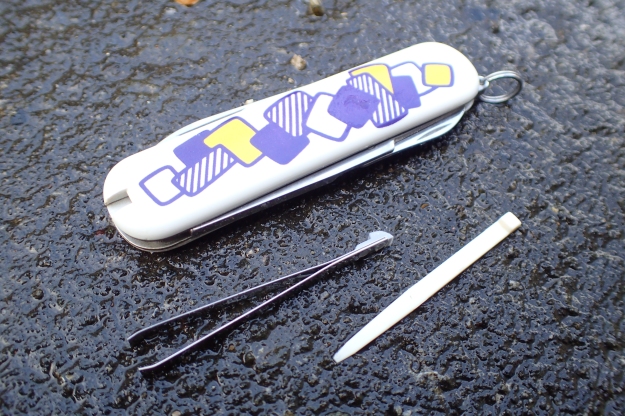 Victorinox have released limited edition sets of the Ambassador with special scales, though nowhere near as many as the Classic has come with. My example shown here, with yellow and purple abstract pattern on one of the white scales, comes from the first Ambassador collection released. Beside the coloured scales of the various collections, the scarce RocKnife series released from 1988 are heavier on trail (having actual stone scales) and deliver no additional functionality, they don’t even have the scale tools, though they are pretty.

The Victorinox Ambassador doesn’t get a lot of attention, but if you feel a Classic isn’t quite large enough for your backpacking adventures, or even your EDC, but you still like the simple toolset, then why not have a glance at this very slightly larger offering. It may be just what you are looking for. 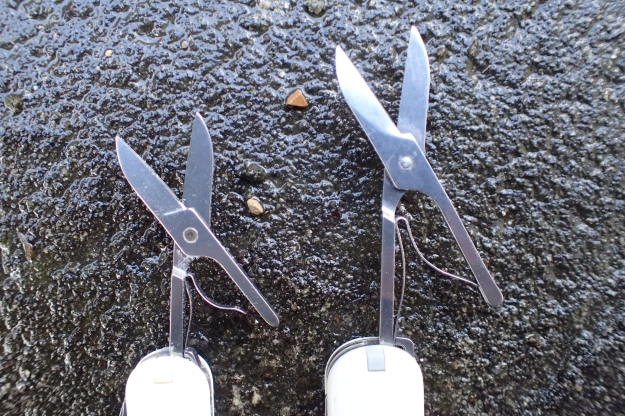 1 thought on “Knife chat: Victorinox Classic too small- how about the Ambassador?”