In June 2017 Leatherman released the Skeletool KB and KBX tools. The KB with straight blade and the KBX with combination straight/serrated blade. These were both developed within their existing popular and good looking folding Skeletools range. Simplifying those, the new KB and KBX offered little more than a single folding blade. The only other tool being a removable pocket clip that also operates as a bottle opener.

If a hiker desires little more than a modest sized simple blade on trail then one of these tools may provide just what is wanted at a decent price from a reputable manufacturer that provides a 25 year warranty.

Leatherman were not the first to bring a ‘naked’ knife to market, however some more simplistic offerings are a little tricky to use and it is relativly easy to accidentally close a blade or nick a finger while closing. Leatherman veered away from total minimalism with these knives and the solid backer plate gives rigidity to the whole knife while also protecting the user when operating it, it being impossible to open the liner lock unintentionally. 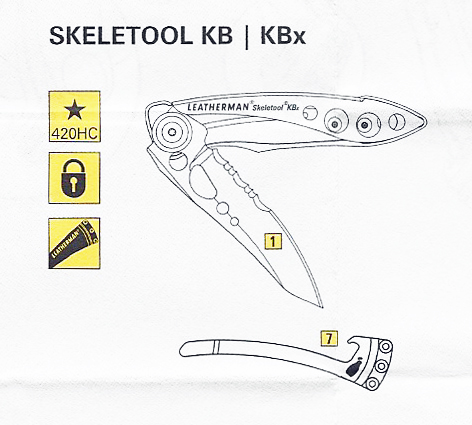 Blades on both Skeletool KB and KBX are made of 420HC stainless steel with a hardness rating of 59 HRC. This means that it will hold an edge better than many cheaper alternatives but is just a little more difficult to sharpen. This steel is found on better quality knives and resists rusting however the KB doesn’t come particularly sharp ‘out of the box’. Serrated edges, such as that found on the Skeletool KBX, are always a bit trickier to sharpen, for this reason Three Points of the Compass thinks the straight edge KB knife a far more practical option for backpacking purposes. Even if that purpose is just cutting a piece of cheese, slicing a salami or sectioning an apple. 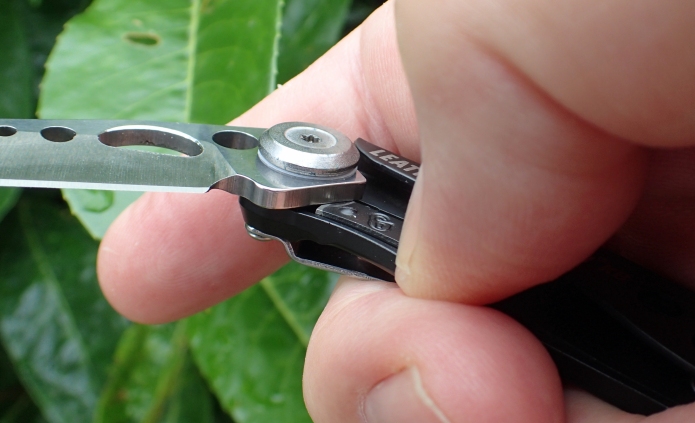 Locked open while in use, the liner lock is depressed with the thumb to close the blade

With a little practice the Skeletool KB can easily be opened and closed one handed and comes with a liner lock so that it will not close on your fingers while in use. The lock engages firmly with a good click and will not disengage until you make it. This of course pushes it up against UK knife laws. The closed knife is 88mm long (3 1/2″) x 14.25mm (max) x 20.50mm (max). When open it is 151mm long. Cutting edge of the brushed steel, drop point, hollow grind blade is 59mm and it measures 2.55mm across the spine, which is quite wide for such a small blade.

Liner lock can be removed by unscrewing the two torx screws holding it. This would make the knife compliant with UK knife law however it is not recommended as the knife is far less safe in use as a result

Because of their small size, food can get caught up in the holes found on some blades quite easily. This is a Leatherman Style CS in use by Three Points of the Compass on the Tabular Hills walk. The blade on this knife also has holes, these fill with food being cut

The aesthetic design of the blade does actually make this knife less practical for use on trail in one respect. While there will be an, admittedly tiny, weight saving by removing some steel from the blade, food can get caught up in the holes and bacteria easily set in if they are not cleaned out.

Three Points of the Compass has encountered this problem before with the same ‘holed blade’ design found on the keychain multi-tool Style series, also from Leatherman. 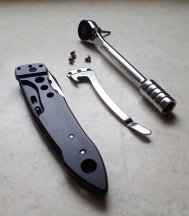 Is there anyone out there that doesn’t know how to open a bottle? There must be as Leatherman include a diagram with their knife on how to do just that with the KB. However for those on trail this probably isn’t the most useful of tools, and nor is the pocket clip. This can be removed if required simply by undoing the three torx screws holding it in place which is probably the first thing that any lightweight hiker would do.

The liner lock could also be easily removed however not only does this lock the blade open, but it also holds it closed, the knife would be considerably less safe if the lock were removed.

The construction is good with no rough manufacturing edges. Handle edges are rounded and even the spine of the blade comes without a 90 degree angle, being slightly rounded. The knife is all metal in construction apart from a slippery polytetrafluoroethylene (PTFE) synthetic washer on the blade pivot. Weight of the knife generally is slightly reduced by the ‘skeletonised’ hole cut-outs. 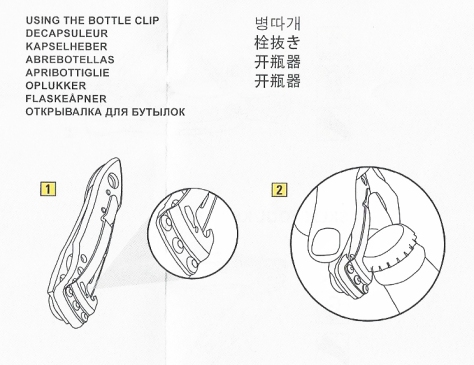 ‘User Guide’ included with knife on purchase- for those of us who don’t know how to open a bottle!

Though thin in the hand, more so if the pocket clip is removed, it is comfortable to hold and use on light to medium work, this is partly due to the curved black anodised aluminium handle. Three Points of the Compass has quite large hands and finds it easiest to choke forward onto the pivot of the blade with my thumb on the top of the wide blade spine as shown here. If the pocket clip is left in place this does increase the comfort in the hand and makes it easier to close the blade. 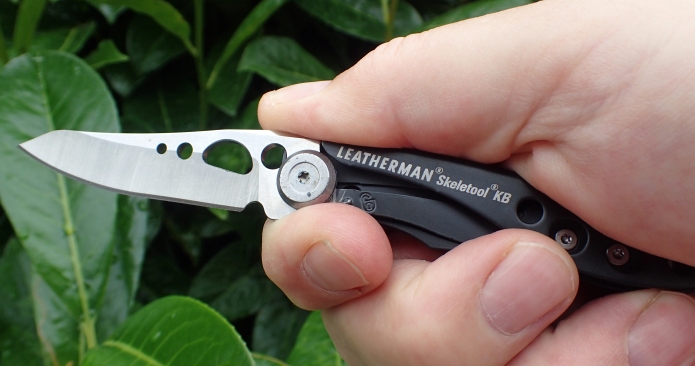 the Leatherman Skeletool KB is beautifully constructed, nothing is loose and the blade cuts well when sharpened. It is an affordable knife from a reputable company with a good warranty policy. It shaves off a few grams by dint of its design however that very design does mean that it is more prone to collecting detritus and food gunk. Locking blade design means that it cannot be carried on a daily basis in the UK though it may be just what is wanted by a backpacker who doesn’t require more than a modest blade just long enough to perform most kitchen chores.