Noun- an obsolete name for nitrogen

Closed-cell foams are primarily used by backpackers as sleeping mats, or occasionally as pot insulators if not using a piece of cut down and shaped reflectex / pipe wrap / windscreen shield. Foam is also found in pack shoulder straps and hipbelts. Many of these closed-cell foams used within the leisure industry are ‘zote foams. These can have varied properties- high durability, flame retardent, soft, semi-soft, semi-rigid, rigid. There is a large range of colours available and foams can be pressed or formed into desired shapes- think the folding ‘egg box’ design of the Thermarest Z-Lite and Z-seat. 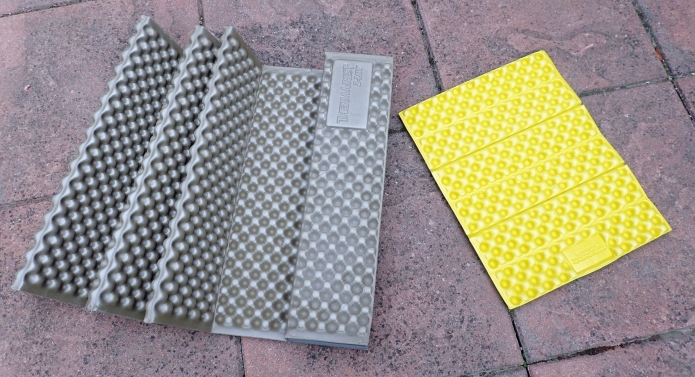 Thermarest utilises dense closed-cell foams for its Z-Lite sleeping mat and Z-seat. Despite being a thin foam, the egg-box construction increases thickness in use, packs down quite well, has some comfort and reasonable insulative capability

Nitrogen expansion technology is used to create block foams with uniform closed-cell size, low odour and standardised quality. These foams are a polyolefin, a polymer produced from an olefin. First Invented in the UK, the world’s largest manufacturer of lightweight cross-linked polyolefin block foams is Zotefoams who make two families of foam- Azote and Zotek. Within the former are Plastazote, Evazote and Supazote and these are used in numerous industries for many purposes.

In industry generally, Evazote is generally used for impact absorption and buoyancy, sports and recreation etc, whereas Plastazote is used for product protection/packaging etc. Evazote has better compression recovery and tear resistance. Supazote is the softest in the Azote foam range. Following manufacture there are a number of supplier chains and both Plastazote and Evazote can easily be sourced in sheet form online.

Most outdoor gear manufacturers use either Plastazote or Evazote for their closed-cell mattresses. These have varying properties of durability and insulation and there is little to choose between them. Plastazote is lighter weight and made in various densities from 15kg/m3 to 115kg/m3 and is also available with increased flame retardant properties. Evazote is similar but a tad tougher and more resilient. It comes in four standard densities- 30, 35, 45 and 50kg/m3. You might also find this material in the construction of your trail shoes. Beware the sub-standard clones on the market. 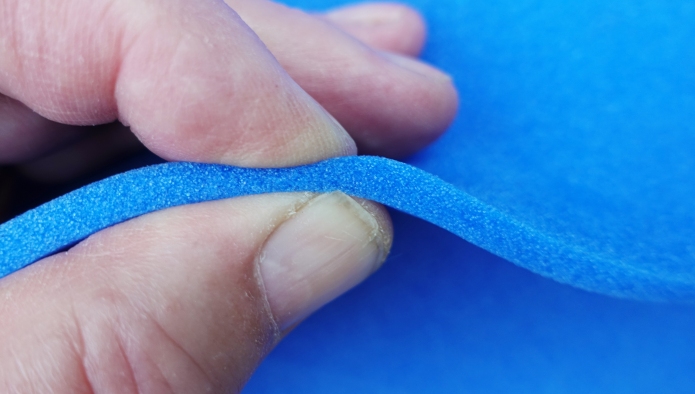 Density in ‘zote foam products is signified in the product code. LD = Low Density, as such- LD33 is slightly more compressible than LD45. The LD33 does offer slightly less insulation than the LD45 but the difference is minimal (0.0405 W/m.K compared to 0.0420 W/m.K, see table at end). The weight of ‘zote foam products is determined by their density. This is taken from the numbers in their grade. Such as Plastazote– LD33 is 33kg/m³ and LD45 is 45kg/m³. The Evazote alternatives would be EV30 (30kg/m³) and EV50 (50kg/m³) so the weight is slightly lower and higher respectively. It can be hard to track down exactly what material different gear manufacturers are using.

The closed-cell sleeping pads from Multimat vary in their construction and their Extreme mats are Plastazote while their Summit mats have both Evazote and Plastazote layered together. Exped and Gram-Counter gear use Evazote for their pads, as do Gossamer Gear with their popular Thinlight pads, which they advertise as being only 1/8″ thick. This is a 3mm thick foam. At the other end of the spectrum the Mountain Equipment Co-op Winter pad was 15mm of Evazote. Any of these pads will likely last a lifetime of hiking, we can’t say that about inflatable pads.

The closed-cell foam sleeping mat became a ‘must have’ for backpackers in the 1970s and features on the cover of Derrick Booth’s seminal-The Backpackers Hand Book, first published in 1972

A very thin closed-cell sheet of foam doesn’t provide much insulation, perhaps 0.5 R-value for an eighth inch thick pad (3mm). Increasing the thickness of an insulating layer increases the thermal resistance so a thin sheet can be folded in half to double insulation qualities. Even a closed-cell pad of 14mm will only be providing an R-value of 1.5 or less. For this reason, if you are not the most resilient of sleepers, or camping outside the summer months, it is best to combine a closed-cell mat with an inflated mat.

If an inflated pad such as my Thermarest NeoAir Xlite or Xtherm deflates during the night (and it has happened), a thin closed-cell pad below can stop things getting too miserable. The design of the Thermarest Z-seat is very clever. It is only a 3mm thick foam but the moulded construction gives a thickness, with air pockets, of 20mm, that is prior to compression under weight of course. Nemo have pushed this design still further. Many hikers will happily sleep on a closed-cell pad. Three Points of the Compass used to do the same decades ago as a young (and tougher) man, on my bulky Karrimat sleeping pad in the 1970s and ’80s. The very first Karrimats, from 1968, were Plastazote, but changed to Evazote mostly due to the increased durability. That famous yellow mat from Karrimor went to Everest and even appeared on a GB stamp, the 14p Duke of Edinburgh’s Award issue of 1981. But let’s not pretend that a closed-cell pad by itself is in any way particularly comfortable, especially if side sleeping. I need a decent thick inflated pad to sleep on trail these days.

While most backpackers enjoy the increased comfort provided by inflatable pads, closed-cell foams continue to offer the same advantages that they had when introduced in the late 1960s- cheap, tough, moderate insulation, improved comfort by smoothing out the hardness of rocks, sticks and pine cones. They can be stabbed, sliced, cut-up and shaped and continue to provide the same performance. You can spill boiling water on them, wipe off tomato sauce and curry, they carry on delivering.

Many outdoor gear manufacturers supply closed-cell foam pads, or you can buy them in the cheapest of gear shops. Or trim and fashion your own to your specific requirements. ‘zote foams can be easily sourced online and purchased in various thicknesses and sizes. Density will also vary according to product code. Efficiency can also be affected by the varying polymers used but the table at the foot of this blog may help. I have a length of 3mm EV50UV Evazote cut down to 910mm x 400mm on which I have rounded the corners. This easily covers from my shoulders to way below my glutes. This thin pad weighs 35g and beside providing just a smidgen of increased insulation below my inflatable pad, also provides a touch of added puncture protection, can be used to kneel or sit on on my shelter floor, or as a ‘porch’ outside. It also has the much appreciated ability to stop my inflated mattress sliding around on the DCF floor at night, especially on not so flat pitches.

Having purchased a length of 3mm Evazote foam, Three Points of the Compass has cut this down to a small length for use under the inflatable sleeping pad at night, or folded in half or quarters to use as a sit pad during the day

A thin, closed-cell foam pad is bulky and has to be either rolled or folded and then strapped outside a pack while hiking, or alternatively lined, tube like, inside a pack or folded against the back. This can provide a little rigidity to floppier lightweight packs. Also, being impervious, rain will not soak through foam if packed as a liner tube. Though water can obviously still penetrate through open ends.

The two foams usually found in outdoor products are a combination of desired durability, rigidity (lack of compression), weight and, of most interest to us, insulative properties, or its R-value. The latter is partly determined by thickness however a product like the Thermarest Z-Lite cleverly utilises dead air space to increase this. When considering what sleeping mat to use, it can be helpful to have a little understanding of R-value. Explaining the newer defintions far better than I, there is a page provided by supplier Ultralight Outdoor Gear.

Thermal conductivity- The k-value, or thermal conductivity of ‘Zote’ foams is determined by the rate of heat flow (measured in watts) through 1m 2 of material at 1m thickness under a temperature difference of 1 degree Kelvin (1 °C). This gives the shortened unit W/m.K in the table below. The lower the k-value, the better the insulating ability of the material.

Thermal Resistance (R-value)- This is the property of a defined thickness of material (or combination of materials). A higher R-value indicates better insulating properties. Thus it is the area in m2 through which a heat flow rate of 1 watt would occur under a temperature difference of 1 degree Kelvin (1 °C). This is calculated using the material thickness (t) and the thermal conductivity (k) of the material. So R-value = t/k

A hiker’s library: ‘Shake Well Before Use, a walk around Britain’s coastline’ by Tom Isaacs

Possibly the most effective gauge of an accomplished author, is […]
A hiker’s library: ‘Shake Well Before Use, a walk around Britain’s coastline’ by Tom Isaacs

While theVictorinox Classic is one of the most popular choices […]
Knife chat: breaking down the Victorinox Midnite Manager

The majority of backpackers frequently choose one of the excellent […]
Knife chat: breaking down the Victorinox Classic

Trail talk: A coastal walk in the wake of vikings and hovercraft

A short wander along the coast from Ramsgate to Sandwich, visiting where Vikings landed and the site of the world's first international hoverport
Trail talk: A coastal walk in the wake of vikings and hovercraft

Map measurer of the month: the Silva scale lanyard

The scale lanyard from compass manufacturer Silva is an interesting innovation but ultimately a failure in design
Map measurer of the month: the Silva scale lanyard

Trail talk: “Clues without a Compass”

Following a National Lottery Grant of £42.5m from the Millennium Commission in 1995, a National Cycle Network (NCN) of some 16 575 miles was established and officially opened June 2000. […]
Trail talk: The Sustrans Millennium Mileposts

Pacer, or Ranger, beads are a simple and useful navigational tool to make at home
Gear talk: Pacer Beads
%d bloggers like this: