OK, puns aside. Carrying a nail brush on a backpacking excursion may be thought of as a touch fastidious. However, when attempting to clean up a pair of mud covered trousers or other clothing, or even crud encrusted fingers, a decent brush does prove its worth when attempting to preserve both hygiene and a more presentable appearance.

For some years now I have included a small plastic nail brush in my ‘ditty bag’. It originally had a handle but I sawed that off to reduce weight and bulk just a touch. It now weighs 32g and works a treat.

But 32g! I was convinced that I could do better than that.

Wandering around Tiger, an expanding chain of shops in the UK that started life as a Danish pound shop, I came across something amongst the middle-class nic-nacs on offer that may do the trick.

Two plastic nail brushes for one pound. A deal not to be ducked

The little plastic ducks with a small brush set into the base retailed at two for £1, so easily worth a punt. Each brush is made in China (no surprise there) and weighs 19g so an immediate improvement on my previous offering. But I was convinced that I could reduce this weight still further.

I was pretty sure that the brush would be glued into the ducks body but with a little judicious levering with a small tip screw driver I was pleased when the brush part simply popped out. Not glued after all but held in place by indents in the body part. The brush part only weighs 7g. I am pretty sure it will not stand up to much abuse but it should do the trick for a while, and, I have a spare…

Together with a small dropper bottle of Dr. Bronners liquid soap concentrate, this should keep clothes cleaner, together with a cleaner me. 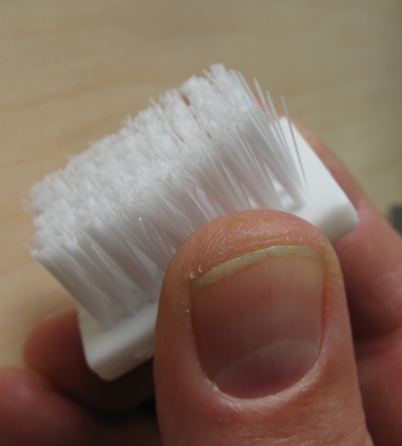 Nalgene bottles are one of the original pieces of modern backpacking gear. Having updated over the years, they remain one of the best options for a rigid sided bottle on trail
Gear talk: Nalgene bottles- hydration, hot water bottle and more…

Knife chat: which to choose- scissors or pliers? Why not have both, with the NexTool Mini Flagship multi-tool

Gear talk: the search for a pillow for a restless side-sleeper

Three Points of the Compass has spent years looking for a pillow to suit side-sleeping while backpacking. A glance at some near misses and what is now working
Gear talk: the search for a pillow for a restless side-sleeper

The Wenger Esquire was a 65mm knife with blade, scissors and nailfile. There have been subsequent rebrands and changes over the years, many of which deserve consideration
Knife chat: The Wenger Esquire and derivatives

Trail talk: the ‘one in every village’ wall box scheme

In the 50s and 60s the Post Office enlarged the aperture on 1000s of postboxes. The results from this 'one in every village' scheme are to be seen on many a hike across Britain
Trail talk: the ‘one in every village’ wall box scheme

The Great Glen Way is remarkable for the number of on-trail facilities provided. This is a simple account of those seen or passed by Three Points of the Compass on a six-day backpacking trip in November 2021
Trail talk: Facilities on the Great Glen Way

Three Points of the Compass backpacked the Great Glen Way in November 2021. My final three days take me the length of Loch Ness, to finish in Inverness
Trail talk: Slighe a’ Ghlinne Mhòir- six days in November. Part two
Loading Comments...
%d bloggers like this: