A library for ornithologists…

Sadly, I only own a (very large) handful of the wonderful Helm Identification Guides. They are pretty pricey and due to my having another set of books, to be covered in a few weeks time, I haven’t been able to justify adding further volumes from this series to my shelves.

Pages from the Helm ‘Finches & Sparrows’ identification guide. A look at this plate and it takes me right back to the hours I spent in Bedgebury Pinetum looking for the lone Scottish Crossbill in a roaming flock of Common Crossbills 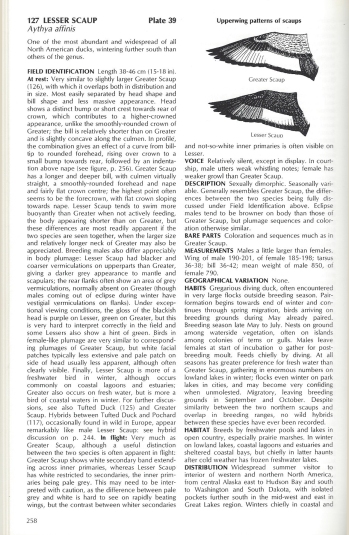 A page from the ‘Wildfowl’ volume

They are lovely volumes, there are updated and improved editions but these are still, almost, leading the way in bird identification. There is a wealth of background information on most species covered and they are not too impenetrable!

The plates were created by leading artists and text is by experts in their field. For example, Peter Harrison produced the Seabirds volume following 14 years of research. Part of that research consisted of him completing his three year art course, then setting off with his wife Carol in a Land Rover on a seven year seabird research expedition. For several years he worked as a deckhand aboard trawlers and crayfishing boats so that he could more easily study and sketch seabirds.

Some species have been omitted from some volumes to the annoyance of some, myself excluded. I am never going to see more than a few percent of those species included. Also, there have been changes to taxonomy in a handful of cases over the intervening years, but that is always the case. As soon as any volume is published, new research occasionally supersedes that which went before.

If you see one of these volumes at a decent price, buy it.

Trail talk: 1962 instruction on how to get in to trouble- “Map Your Own Home”

Three Points of the Compass has written before of the […]
Trail talk: 1962 instruction on how to get in to trouble- “Map Your Own Home”

A glance back at some bothies visited over the years… A’Chuil is a well-situated and appreciated halt. Particularly by those on the Cape Wrath Trail. As I approached the bothy […]
Trail talk- bothies

As the temperature creeps down, it is time to use a gas stove admirably suited for winter use- the Kovea Spider
Gear talk: Kovea Spider

Trail talk: “Camp the Outward Bound way- and laugh at the weather”

This 1963 article on 'how to camp' appeared in the Eagle Annual
Trail talk: “Camp the Outward Bound way- and laugh at the weather”

Map measurer of the month: The Roller Rule- “The Pencil with a Brain”

Trail talk: A brief history of rambling guides for Kent

“Kent includes within it every variety of scenery which can […]
Trail talk: A brief history of rambling guides for Kent
%d bloggers like this: