Holiday Camp and should anyone unfortunately prove, by word or deed, to be otherwise,

he will be liable to instant expulsion”

Amongst the first public campsites in the World opened on the Isle of Man in 1894. The venture came about due to the frustrations experienced by Joseph Cunningham and his wife when, employed as the superintendent of The Florence Institute in Toxteth, Liverpool, he arranged annual week-long youth camps at Laxey on the Isle of Man in 1892/3. The following year the annual camp was held at nearby Howstrake. Unprofitable at this juncture, Joseph left the institute and he and Elizabeth went it alone, running the next camp at Howstrake themselves as a much expanded and more ambitious enterprise. Within a few years up to 600 men were staying at the ‘tent city’ each week. Open during the finer months, from May to October, the Cunningham’s considerable business acumen ensured the success of the camp and demand quickly outgrew the capacity of the site. However the Cunningham’s were tenants only and sought better control of the facilities they wished to provide. 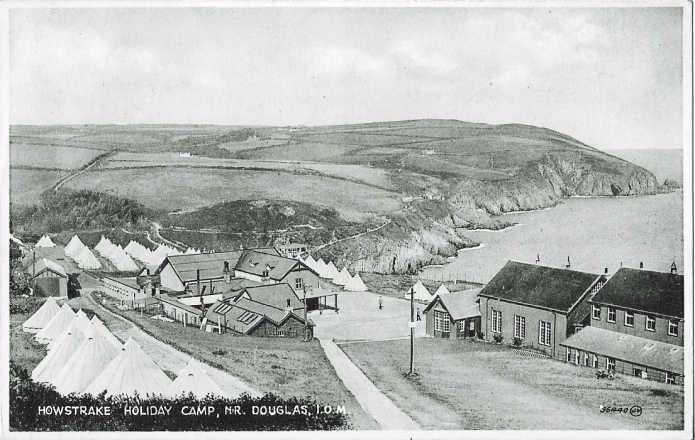 Howstrake camp on the Isle of Man

In 1904 they opened a new camp just a couple of miles south at ‘Little Switzerland’. The larger five-acre site they had acquired had room for not only around 1500 tents but also a large dining pavilion where ‘up to 3000 can be accommodated at a time’. The new Cunningham Young Men’s Holiday Camp was originally open March to October but by 1933 this had changed to May to September. The camp at Howstrake continued under separate management.

The ‘Camp Herald’ was an annual publication that included photographs and reviews of the holiday camp, listed excursions and facilities and included a booking form, 1933

The camp is usually considered the first holiday camp though some argue that it should be discounted as accommodation was within tents at first. Within a few years wooden huts supplemented the ex- army bell tents. Tents were eventually replaced with more substantial chalets built by WWI internees. The description of these as ‘holiday bungalows’ may be somewhat stretching but, by account, most holidaymakers enjoyed their stays immensely, returning year on year. Reading and writing rooms were provided. There was a 90 feet long swimming bath, lawn tennis and badminton courts, putting and bowling greens, and sports field, at which medals were awarded on the weekly Sports Day.

Bungalows and tents had electric lighting and could each accommodate up to four campers. The same fee was charged for each.  Tents came with wooden floors. ‘spring bedstead and comfortable bed’. More luxurious accommodation was provided in the camp’s ambitiously entitled Snaefell Mansions.

“Use of intoxicants, gambling and improper 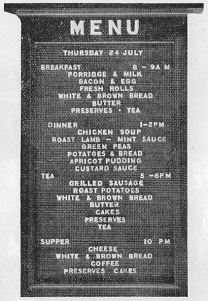 Menu board at Camp Cunningham

A programme of daily outings and entertainment was provided, as were three meals a day and an evening ‘supper’ for each camper. The camp had its own bakehouse, laundry, ‘refrigerating apparatus’, electricity generators and workshops.  A ‘camp orchestra’ kept diners entertained at mealtimes. There was a camp farm at Crosby, some five miles away. This grew fruit and vegetable for the kitchen and had pigs and a herd of 130 cows. While the local milk produce was appreciated, young men were forbidden some pleasures, for Liverpudlian Cunningham was a Presbyterian and strict abstainer from alcohol. Though no doubt many took advantage of certain off-camp establishments when away for the day.

Enamel camp badge. An earlier design incorporated the word ‘Cunningham’ at the base of the tent, as shown on the front of Camp Herald publication. Cost- 4d

Campers could sign up to be bussed to various points on the island. Alternatively, hikes were organised, cameras could be hired and trumpets issued along with song sheets so that groups of walkers could sing while tramping, alongside a ‘merry tune’ from anyone that was musically inclined.

The camp was taken over during both World Wars. In 1914 as an internment camp and as a Royal Navy training school- HMS St. George, during WWII. Following the war the family declined to continue with the camp and it was sold to a Blackpool businessman. Joseph Cunningham himself had died 4th September 1924.

The Concert Hall cleared for a dance

Three Points of the Compass has not, as yet, visited the Isle of Man but has stayed at many a holiday camp as a youth. Various Butlins camps were visited by the family each year as we grew up, they were (relatively) affordable and provided the diversity of entertainment required for a large family with wide age ranges and gave my hard working parents the break they deserved. I am told that we never visited the two main rival institutions- Warners and Pontins, but other smaller independent camps were also occasional destinations. Either alone, or with one or two of my siblings, I would wander off exploring dunes, cliffs, woods and beaches. Rock-pooling and fishing. I invariably had a great time, got sun burnt, sustained multiple scrapes on rocks and thorns, startled adders in the bracken and pulled wrasse from the pools left stranded by retreating tide.

Disclaimer– Three Points of the Compass is well aware that the title to this blog is incorrect. The inhabitants of the Isle of Man are British, however the island is not part of the United Kingdom. The Isle of Man, situated between Great Britain and Ireland, has an independent administration and government. However the establishment of this first holiday camp is so closely linked to that which evolved in the UK that it cannot be ignored.