Three Points of the Compass attended the Youth Hostel Association’s (YHA) 2019 Showcase and AGM today. For a number of years I have lamented the direction in which the organisation seemed to be heading and today I fully expected to hear a litany of corporate speak and talk of commercial direction backed up with more closures of small hostels and grand designs on city centre hotels. However, for the most part, I was pleasantly surprised. It seems the YHA is back on track.

“we are thriving, a confident organisation” 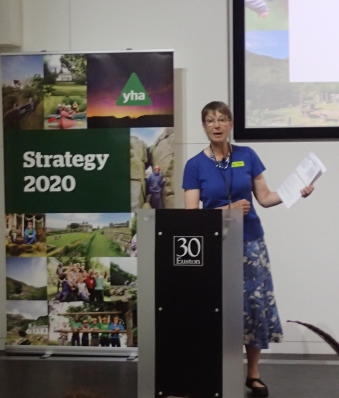 The past few years have seen swathes of much loved and usefully situated smaller hostels closed. It used to be that anyone completing one of the longer National Trails could walk from hostel to hostel, that hasn’t been the case for quite some time. A questioner from the floor made the point that ‘what used to be a network of hostels is now more a patchwork‘.  Outgoing Chair Peter Gaines admitted that

‘the YHA has had to close a lot of hostels.. [there has been] a legacy of under-investment but [this] has resulted in a present day portfolio of sustainable hostels. If a hostel has only 20-30 beds, it is very difficult to make it financially viable unless subsidising it from elsewhere in the network’.

This statement was subsequently polished but there can have been few present that didn’t recognise the truth in his comments. And sustainable it is, the YHA, now the ninth largest UK Charity by membership, has been making a healthy profit for some time now.

With some 150 hostels in England and Wales catering for over 900 000 visitors each year, hostel revenue is now circa £50 million per annum, up from circa £39 million in 2010. Much of this is being reinvested. There has been an almost complete refurbishment of all their hostels, with major refurbishments of Bryn Gwynant and Truleigh Hill taking place this year. It is hoped that the difficulties around the completion of the showcase YHA Stratford will soon be resolved. That hostel will be an earner for the organisation as it can be occupied year round.

Sir Chris Bonington has long been a friend of the YHA. He spoke of staying at hostels as a boy when he and a friend made a poor attempt at climbing Snowdon in the winter of 1951. Wearing hob-nailed boots from an Army Surplus store and a cut down school mac, he was carried down on an avalanche. However, he was then hooked on climbing

Ten years ago the YHA was realising an average of around 50% occupancy across all hostels, this is now around 59%. This is not the case in many of the large city hostels, while Cardiff is around 60%, London Earls Court is 85% and YHA London Central is 89% occupancy. The YHA has enjoyed a trading cash surplus of £3.2 million, which while down £1.3 million from the previous year, is still their second highest trading cash surplus ever. The Executive team is expecting £2 to £3 million to be the annual norm moving forward.

The YHAs strategy for some years previous has been focused on putting them on a firm commercial and operational footing, making themselves sustainable.  We have all been witness to the cuts made, the closures that still rankle with many. It is not now all about the money though.

The outgoing Chair, Peter Gaines has been forthright in his aim to make the YHA more democratic. He has been largely successful in this and can retire with pride. The number of Company Members has increased from 136 in 2018 to 796 in 2019 and the explosion in voting numbers has resulted solely from it being made an online facility. There is still some work to be done in making it more accountable to its 145 000 members, but they are well on their way.

Myself and about 350 others at today’s event heard of plans to provide 500 new beds in key locations in the north of England. There was little more information on that divulged, one can only hope that it is not all city centres. With financial worries mostly behind them, the YHA is making a return to its original charitable aims:

To help all, especially young people of limited means, to a greater knowledge, love and care of the countryside, and appreciation of the cultural values of towns and cities, particularly by providing youth hostels or other accommodation for them in their travels, and thus to promote their health, recreation and education 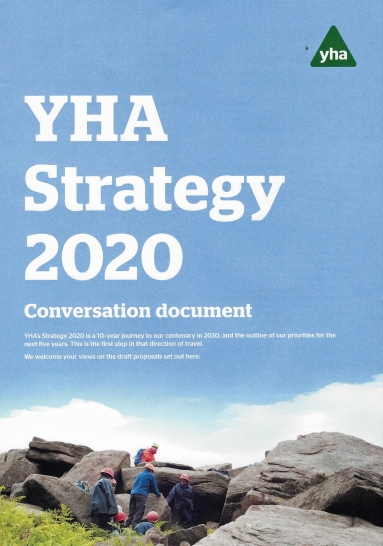 YHA Strategy 2020. The contents of this ‘conversation document’ are ambitious and bold. In draft form at present, it is to be hoped that the final strategy document has not deviated too far from this

Only signed off by the Executive days before, the YHA proudly distributed its new Strategy 2020 Conversation document, ‘hot off the press’ (so newly printed it arrived mid-morning), this sets out ambitious priorities for the next five years leading up to their centenary in 2020. It is still a working document and the YHA is seeking comment on the content, However I for one can only be impressed with the vision contained within:

In 2038, every 18-year old in England and Wales will enter adulthood having experienced the positive impact of YHA. They will have lifelong access to hostelling as their route to a world of affordable sustainable travel

Writer, journalist and ‘extreme sleeper’ Phoebe Smith delivered an amusing and joyful presentation. On her first ever solo wild camp she “ran into the one thing that strikes the fear of god into us… a youth group!”

To put that into context- there will be some 750 000 children born in England and Wales next year. The YHA was born out of social reform in the 1930s. At that time the ambition was to transform the lives of young people born into crowded and polluted cities. The YHA’s very first handbook laid out their early plans… ‘to improve the health of body and mind… [offering] cheap lodging as a means and not as an end’. The YHA’s vision laid out today expands upon this.

As well as providing budget accommodation for members and non-members alike, The YHA is stepping up its charitable ambitions- it provides free family activity breaks for low income families with additional complex needs, hosts residentials for youth groups and schools, free weekend breaks for some families with disabled children, offers socially inclusive volunteering opportunity and works with young people with special educational needs.

There is plenty of evidence showing how young people thrive when exposed to the outdoors. Outdoor adventure is the second-most effective in advancing learning in young people (after 1:1 tuition). Hostels, and the activities run out of them, provide that outdoor facility. The YHA has been voted the number one ‘not for profit’ hostel operator on the international stage and their stated ambition is to be the leading charity in health and well being, particularly with young people. I for one am impressed by this refocus and wish them well.

‘Because where you go changes who you become’

Handstamp impression from YHA St. Pancras International. The 2019 Showcase and AGM took place only a few hundred metres from this well-appointed London hostel

A hiker’s library: ‘Shake Well Before Use, a walk around Britain’s coastline’ by Tom Isaacs

Possibly the most effective gauge of an accomplished author, is […]
A hiker’s library: ‘Shake Well Before Use, a walk around Britain’s coastline’ by Tom Isaacs

While theVictorinox Classic is one of the most popular choices […]
Knife chat: breaking down the Victorinox Midnite Manager

The majority of backpackers frequently choose one of the excellent […]
Knife chat: breaking down the Victorinox Classic

Trail talk: A coastal walk in the wake of vikings and hovercraft

A short wander along the coast from Ramsgate to Sandwich, visiting where Vikings landed and the site of the world's first international hoverport
Trail talk: A coastal walk in the wake of vikings and hovercraft

Map measurer of the month: the Silva scale lanyard

The scale lanyard from compass manufacturer Silva is an interesting innovation but ultimately a failure in design
Map measurer of the month: the Silva scale lanyard

Trail talk: “Clues without a Compass”

Following a National Lottery Grant of £42.5m from the Millennium Commission in 1995, a National Cycle Network (NCN) of some 16 575 miles was established and officially opened June 2000. […]
Trail talk: The Sustrans Millennium Mileposts

Pacer, or Ranger, beads are a simple and useful navigational tool to make at home
Gear talk: Pacer Beads
%d bloggers like this: