‘In the camp all classes and ages amalgamate;

It is unsurprising that the earliest form of organised camping in the UK as a leisure pursuit was associated with the increase in the popularity of pleasure boating and canoeing in the late Victorian and Edwardian eras, especially on the River Thames. As the railways took trade from the waterways, many of the less congested rivers became safer places for the more wealthy individual to spend their leisure time and indulge in their romanticised rural idyll. This complimented the growing appreciation in rowing, paddling and athleticism. Small, often quite light, craft could be purchased, rented or built and simplified the carrying of quite heavy, bulky camping equipment. Later, cycle camping enabled budding adventurers to take to the roads in similar fashion. Backpacking, as we would identify with it, occurred later, as still further refinements in outdoor gear were established.

John ‘Rob Roy’ MacGregor formed the Canoe Club on 25th July 1866, this was the first canoe club in the World. With royal patronage, they became the Royal Canoe Club in 1873. The Prince of Wales, having joined the club as member and Commodore, was Member No. 57. Membership seems to have been somewhat elitist with members mostly comprised of ‘Diplomats, Doctors, Lawyers and Businessmen’. MacGregor also designed and built a popular lightweight, short canoe suited for paddling, called a ‘Rob Roy’, his boat survives and is held by the National Maritime Museum.

With this boat, MacGregor crossed the English Channel (the canoe travelling as luggage on board a cross-channel steamer) and explored a thousand miles of European waterways, later writing a book of his exploits. He inspired many people to take up the sport of canoeing, including Charles Dickens and Robert Louis Stevenson

Racing was the primary interest of most members of the Canoe Club. Camping canoeists looking for kindred spirits had to wait until 1933 when the Camping Club of Great Britain and Ireland formed a specialist sub-section, later known as the Canoe Camping Club. 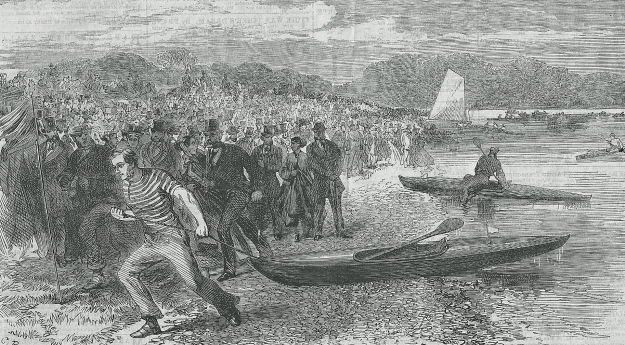 The Canoe Club held a grand muster at Thames Ditton, between Hampden Court and Kingston, on 27 April 1867. Robert MacGregor with his ‘Rob Roy’ canoe led the procession of canoes to the start of the race course. By 1874 the race became known as The Paddling Challenge. Held each year, it is the oldest canoe race in the World. Illustrated London News 4 May 1867

In August 1887 a handful of newly formed canoe clubs were invited by the Royal Canoe Club for a joint cruise on the Norfolk Broads, attendees agreed the formation of a British Canoe Association. This was along the lines of the already successful American Canoe Association. MacGregor became its first Commodore.

The first meeting of members of the British Canoe Association was at Loch Lomond in 1888, the next at Lake Windermere in the English Lake District in 1889 (members included a honeymooning couple). When the 1890 meet was held at Falmouth on the South Coast, the association had in excess of 150 members, females were eligible for membership from the outset.

‘… its object shall be the promotion of cruises and meets… for the purpose of cruising and camping… to procure increased facilities for cruising, camping and exploration’

From- the Rules of the British Canoe Association

1889 was also the year that a classic in English literature was published. Jerome K. Jerome’s Three Men in a Boat recorded the author’s trip up the Thames in a camping skiff, with his dog Montmorency and two friends, Harris (Carl Hentschel) and George (George Wingrave). The book received scathing reviews from the critics but the public loved it.

When Jerome K. Jerome set off with two friends and his dog for a cheap holiday on the River Thames, their misadventures were primarily down to their choice of craft and their amateurish attempts to control it- The camping skiffs had three iron hoops over which a green waterproof canvas canopy could be stretched. Sleeping within their craft reduced any reliance on campsites and unwelcoming land owners. Three Men in a Boat, first published 1889 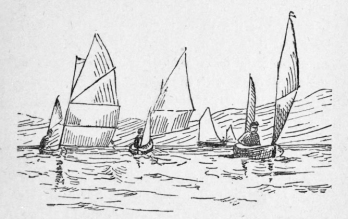 There were various definitions of canoe, but a loose interpretation was usually accepted outside of the stricter criteria used in races and competition. Sailing canoes were introduced in the 1870s, these included the Mersey Sailing Canoe- which were up to 20 feet in length.

Canoe camping became a popular pastime with week long camps being established where fellow campers would live the itinerant lifestyle, foregoing shaving and town garb much to the amusement, interest or disgust of the genteel town people they encountered.

“How jolly to be in a boat again- to be without collars and top-hats- to be beyond reach of the postman, the tax collector and the ‘knocker up in the morning’ “

Lightweight tents, or what passed as lightweight at the time, were utilised. Popular styles were the Mersey, Clyde, Marquee and the usual ex-military or military clone Bell tents. Club burgees fluttered from their apex. In contrast with the US penchant for wood fires, small spirit stoves were favoured for cooking. The Mersey, Irene and Boddington stoves were popular, however I have failed to find any information or images of these. John Davey Hayward, in his 1891 book Camping Out notes that a camper who has not eaten in four hours is a ravenous animal and dangerous to meet.

Popular camps were established along the River Thames. Within ten years of their creation the Royal Canoe Club had provided a camping ground for canoeists at Teddington. Members of the Mersey Canoe Club favoured the popular camp on Hilbre Island at the mouth of the River Dee where canoeists would spend the night in hammocks strung in a rented shed.

Landowners became increasingly annoyed with river campers, trees were pulled down for fires and rubbish left. As the number of people wishing to camp increased, available sites were on the decrease. Between the Wars canoeists became disillusioned with river camping. Many prime waterside sites were now private, had newly built dwellings or were simply fenced off. There was an increase in the number of camping skiffs and camping punts available for rent as this freed rowers and paddlers from relying on finding an affordable or welcoming site each night. A canopy could be strung across the boat itself and provided a cosy home for two or three friends during an affordable multi-day excursion. Such boats also required a degree less skill to control than the lightweight canoes and kayaks. River camping was no longer the preserve of the wealthy.

“When darkness reigns around, the lighted candles from their sconces throw a beam of warm light across the still moving inky water of the pond like river. The Primus starts to roar, the fry-pan splutters, plates rattle, bottles gurgle and tongues loosen. Who can deny that the river camper’s lot is cast in pleasant places?”

The riparian camper was now no longer confined to canoes and kayaks, huge numbers of camping skiffs and camping punts could be hired and the democratisation of the pastime ensured that many would extend their new found enthusiasm for an outdoor life to the roads, lanes, tracks, fells and mountains. The golden age of river camping may be long gone, leaving slalomists, scullers, rowers, punters etc. in its wake. However the ripples of the Victorian experiments in camping, now extend far beyond the river banks. 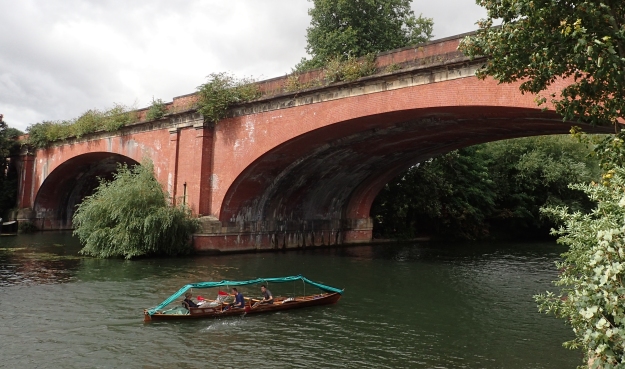 There is a timeline of many of the most important or influential UK outdoor organisations on my main website. I will be covering a number of these later in the year. Do have a glance at the list and see where today’s organisations fit in, you may even be able to suggest a glaring omission to the list!