While it is doubtful that many backpackers would dream of packing such an item, Three Points of the Compass advocates carrying a tin opener while on trail, especially on a multi-day hike. Most of us will either pack along dehydrated pre-prepared meals to eat, or rustle up a meal with some easy prepared foodstuffs- couscous, powdered potato, noodles, my particular favourite on trail is preparing a lentil curry. However, especially in the UK, there is often the opportunity to supplement this type of dried and lightweight food with heavier tinned food. Particularly if staying the night on an official pitch, with either on-site or local shop selling simple goods, if usually at an extortionate price. 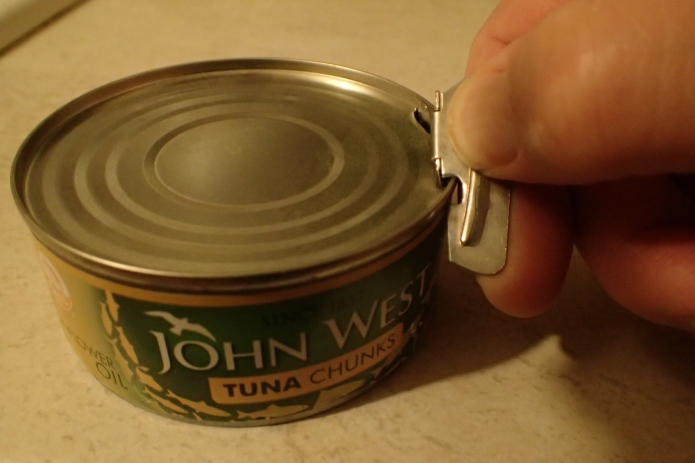 A welcome tin of protein purchased in a Youth Hostel while on trail. Not every tin of food comes with a ring pull. Without a tiny lightweight opener, gaining access is going to be difficult away from the hostel’s ‘campers kitchen’. This opener weighs just 4.1g

Not all tins come with ring pull tops and few of us are packing any sort of large multi-tool that includes a tin, or can, opener. Rather than attempt to bash a way into a tin with a tent peg, or slice open a finger attempting to gain access via a small folding penknife or simply do without the contents, why not simply pack along a tiny lightweight opener. There really isn’t much else that will perform the task they do and for a handful of grams weight penalty, such ‘food-joy’ could be appreciated…

When it comes to lightweight openers, the military have our backs. And it is to the various tin/can openers that have been produced by the armies of the world that the backpacker should turn. I seem to have an assortment of these around the house and have pulled together what I could find for the header photo above. One I won’t be covering is the large Czechoslovakian Army issue ‘Perfex’ opener shown above. While well made and effective, there are simply too many alternatives to this folding 26g tin and bottle opener.

One of the largest viable options that a backpacker could consider is the Field Ration Eating Device, or FRED. This pressed steel device was introduced during the Second World War and issued to the Australian military. It has the Defence Stock Number: 7330-66-010-0933. Still manufactured today, mine was made in 2007. Various clone rip-offs have been made in recent years. As well as the effective tin opener, one end of the tool has a bottle opener and the other end has a shallow spoon. The 90mm length makes the tool easy to use and twist in the hand. While you can eat with this, its short spoon length means that you put yourself at risk of cutting yourself on the edge of a freshly opened tin, while the shallow bowl is useless for more liquid foodstuffs. It has not endeared itself to everyone forced to use it and earned the unfortunate sobriquet- ‘Fucking Ridiculous Eating Device’. For backpacking, there are better options.

There are quite a few small, but actually medium sized opener options. These include the well known P-51, centre in the image below. Supposedly given this designation due to its 51mm length, mine is actually a 53mm long British Army equivalent. Every 24 hour ration pack I had while serving in the Army had one of these included, it came in a paper sleeve wrapper with printed instructions on how to use it. I had dozens of these ‘Baby Can Openers’ but they have all gradually gone and this 1981 example is my sole survivor. Stamped with- ‘1981 – W.P.W ‘crows foot arrow’ 129 – 9982′, it has opened hundreds of tins and is still in perfect operating order. There are many clones (BCB- second left) and alternatives both used by other armed forces and subsequently manufactured for the civilian market. The Highlander Survival opener shown here, combined with a bottle opener, is widely available however I don’t like it. It doesn’t operate particularly well, ripping open a tin rather than piercing and cutting easily. Also the bottle opener section makes it uncomfortable in the hand while opening tins. The opener on the right in my hand was issued to the Swedish Army and these work well. However the larger military opener on the left is a horrible tool with a very blunt and barely usable cutter, it is only the slightly longer length that enables sufficient force to be applied.

The small holes punched in many of these openers enable them to be hung from a keyring however the cutting tip can swing open and rip holes in pockets. An easy solution to this is to use a small rare earth magnet to keep it closed when not in use.

Most backpackers constantly strive to remove excess weight from their packs. Even the lightest option shown above, the Swedish 7g opener may cause some to baulk. Despite this, Three Points of the Compass suggests that one of the lighter and smaller tin openers should still be seriously considered. Ranging from around 4 to 7 grams there are truly lightweight options.

These are tiny, the smallest here is only 38mm long though the shorter length does mean that it is uncomfortable to use for any extended period. However none of us are using one of these for an extended period on trail. All we want to do is open the odd tin on occasion. The rounded ‘Weekend’ 6.6g opener shown on the left in my hand is probably the best of the small military issue openers. However they are not the easiest to find. After these, the famous P-38, on the right in my hand, is a superb choice and weighs under five grams, this is stamped ‘US Shelby Co.’ indicating that it was made by Mallin Shelby Hardware inc. These openers were developed in 1942 and are still made today. Smaller than the P-51 shown above, these are not quite so comfortable to use but are just as simple to operate. The P-38 has a wide and loyal following. For a good deal more information on these, there are a number of sources online, one of the more informative can be found here.

The 84mm Victorinox Alox Cadet includes a really efficient tin opener but weighing 45.9g it is not the lightest of options

Some pocket knives come with a tin opener amongst their toolset. Three Points of the Compass has looked before at two of the military knives that include an opener, these were the British and German options. For myself however, if not carrying one of the small keychain sized multi-tools from Leatherman, Three Points of the Compass prefers one of the smaller 58mm long knives produced by Victorinox for backpacking trips. Sadly, none of the 58mm Swiss Army Knife options includes a tin opener amongst their tools. Some of the larger knives that Victorinox has produced do include fantastically efficient openers but for most hikers, they are probably either too heavy, or equipped with tools not required on trail. The 28.8g Alox Bantam and 45.9g Alox Cadet from Victorinox both have excellent tin openers, however the first has a combination opener on a single layer knife that lacks scissors, which some may regard a necessity on a Swiss Army Knife, while the second is a better equipped two layer knife, with an even better dedicated tin opener, yet also lacks scissors. Interestingly, these two types of opener work in opposite directions.

Victorinox’s instructions on how to use its combination tool, as found on its 84mm Alox Bantam

While all of these openers are easiest to use by right-handers, left-handers can also use them- holding them in the left hand and working round a tin in the opposite direction. So, to carry a tin opener or not? That is your choice. I do. If you do decide to pack along a small opener I suggest don’t bother with any of the civilian clones. Instead choose one made for the military, they number in the millions and were specifically produced to be both durable and efficient. Most of those shown above can be found, with a bit of searching, on the second hand market so simply buy the real thing.

6.6g Weekend opener in use