I’ve been waiting for this delivery. I won’t say that I was worried, but I have certainly been very conscious that time is ticking down to the start of my hike. As I write this I have 52 days to go. This morning I emailed a company from whom I had ordered (and paid) for three pairs of trail shoes some weeks back. At the time, they had quickly told me that there were supply problems not only to the UK, but Europe in general. I’ll wait I replied, as I say, I’ve been waiting a while for this delivery. 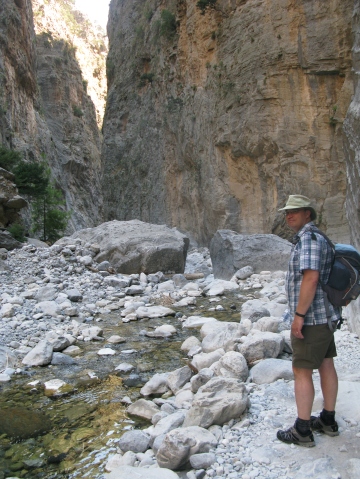 I have worked through a number of different types of trail shoe over the past few years since I made the switch from boots. I couldn’t get on with the Salomen XA Pro 3D, the heel cups fell apart after less than two hundred miles.  Inov8 did me well for a while, the 295’s and 330’s were good, with lovely traction, but they messed around with the design and they proved less suited to my feet. Again, the heel cups fell apart after too short a period. Then I switched to Brooks Cascadia 8s. I loved the wider toe box and the heel cups were more robust, never wearing out. But the material across the top and sides of the feet wore through after less than three or four hundred miles. I expected better.

So I made the change to a pair of Altra Lone Peak 2.5 and thought ‘at last’, I’ve found them! I loved the wide toe box, even if it did look like I was wearing a pair of shoes designed for a circus clown. I could get five hundred miles plus out of a pair with no splitting of uppers, the heel boxes held together. Traction wasn’t fantastic, but I could live with it. Also, I found the zero drop to my liking. So I happily changed to the 3.0’s when I had to. They were just as good and the changes had not detracted from the shoes. I have found that the inner sole starts to wear at the ball of my foot after six hundred miles, so I need to be careful to switch out prior to that.

The Altra Lone Peak 3.5 continue to provide good room in the toe box for feet and toes to spread

When I was making my final gear choices for my upcoming hike, it was toward the 3.5’s that I turned. However they have proved somewhat difficult to source. After more weeks that I am strictly comfortable with, I received a text from my wife this morning to inform me that they had arrived at her work place. I am now set with three pairs of Altra Lone Peak 3.5’s in UK size 12 (US 13). Each pair weighs 730g, or 805g including my orthotic inserts.

Altra Lone Peak 3.5’s only have moderate cushioning and zero drop between heel and toe. However my orthotic inserts mean that I retain a very small drop

Needless to say, some changes have been made- new drainage holes, I am fine with that. 4-point gaiter system, I only require the two for my Dirty Girl gaiters so fine, that doesn’t bother me. Also an upgraded upper mesh, I am pleased with that change. The soles are unchanged. These trail shoes will do me well I believe. Manufacturers seem to revel in messing about with the design of successful products, especially trail runners, but the 3.5’s seem to have retained all that I like with a couple of OK upgrades. The design has also changed in that they don’t look so ‘clownish’ now. They still have the same width in the toe box, as evidenced by comparing the insoles from 3.0 and 3.5, but devilish things seem to have been achieved by the designers in the latter shoe’s appearance. 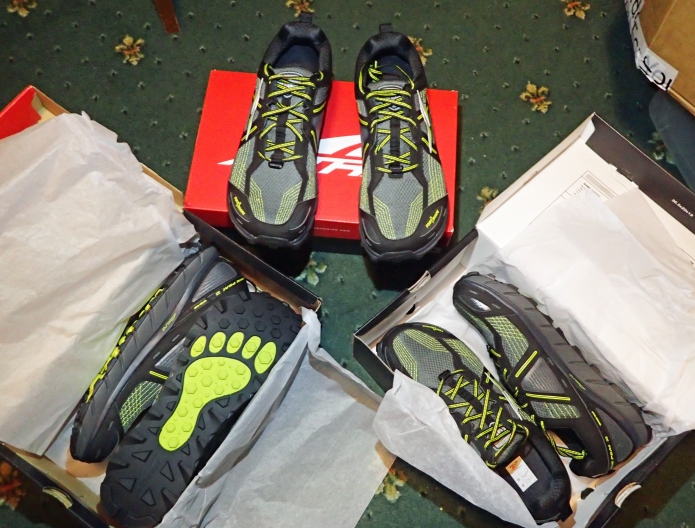 All ready for my Three Points of the Compass walk- three pairs of Altra Lone Peak 3.5’s in UK size 12

Three Points of the Compass is looking back on a lifetime of knots. Time to refresh familiarity and learn a couple more
Trail talk: knotty years

No.7 My First Opinel is an affordable introduction for inexperienced young people to learn safe knife use
Knife chat: No.07 Mon Premier Opinel

Three Points of the Compass is looking at his hydration system- do the collapsible HydraPak Ultraflasks have anything to offer?
Gear talk: HydraPak flasks