Very frequently all that is ever required of a knife on a hiking trip is a single blade. Opening food packages, trimming tape, cutting cheese. Simple tasks, for which a small blade is all that is required. I have used the Spyderco Bug, with its 33mm blade, or the Opinel No. 8 with its longer 85mm blade, on some camping trips. In fact the former knife still sits on my keychain as part of my EDC, but it no longer accompanies me hiking.

The ubiquitous Swiss Army Knives produced by Victorinox are familiar and affordable tools. The knives that Victorinox have made over the decades are broadly classed by length: 111mm, 108mm, 100mm, 93mm, 91mm, 84mm, 74mm and 58mm. Of these, a knife from the smallest, the 58mm stable, is often all that is required while backpacking. Three Points of the Compass has selected a ‘top five’ from these that would make a good trail companion. 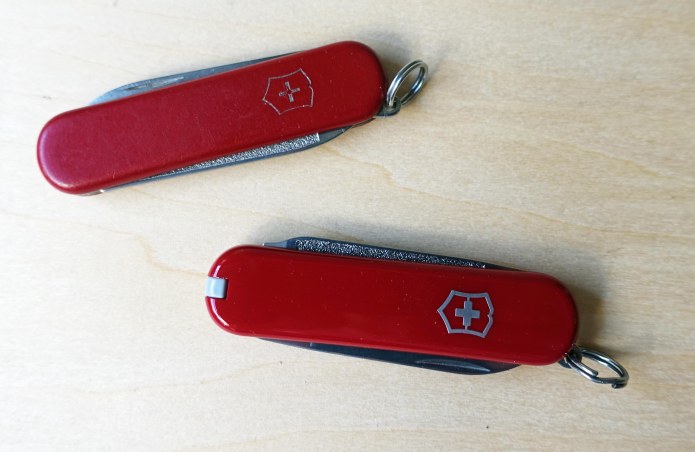 Victorinox have produced two extremely minimalist keychain knives that I think are particularly suited for taking hiking. The first is extremely thin at only 7.20mm thick. This is made possible by the exclusion of any scale tools such as tweezers and toothpick. The 15.4g Victorinox Princess has a small 34mm drop point pen blade in common with most blades found on the 58mm range of Victorinox tools. On the other side of the single layer tool is a small nail file with nail cleaning tip. There is also a small keyring positioned at the other end of the open blade but lets not get too excited over that. You will see that my example has a blade opening toward the keyring, this is an error in design as it makes it more difficult to use the blade if it is hung from anything and used while still attached. 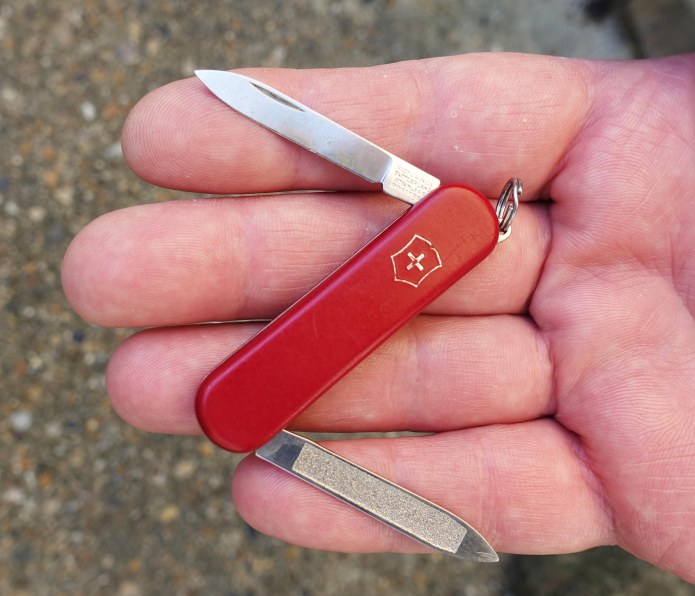 Offering just a little more functionality is what I feel a better choice than the Princess as a simple bladed knife to take on trail. This is the 16.4g Victorinox Escort. Just a little thicker at 7.70mm, the very slight extra width of the red cellidor scales allows the inclusion of a small set of tweezers and a useless toothpick. If taking one of these knives on trail I suggest replacing the 0.3g plastic toothpick with a 1.2g emergency Firefly ferrocerium rod.

The pen blade on the Escort is the same as that on the Princess however my version is more practical in use as when open the blade is situated at the opposite end to the keyring, making it easier to use if still attached to a lanyard or similar. Be aware that other versions of this knife have the same opening configuration as the Princess. The nail file is also the same as that on the Princess other than the change of the nail cleaning tip to a 2.5mm flat ‘SD’ screwdriver tip, which could potentially be of more use on trail. So, due to it being only a gram heavier than the Princess, the Escort is my fifth choice of 58mm Victorinox knife for hiking with- particularly suited as a very simple bladed tool. 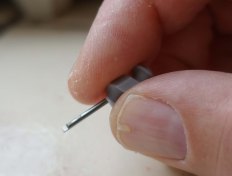 These two knives are very simple affairs and many other 58mm Victorinox knives feature either flat or Phillips screwdrivers, occasionally both. I will be looking at those in later posts, however there is the option of also carrying a simple little screwdriver if it is felt there is the need. You could do worse than taking one of the unique, flat, four way screwdrivers that were first produced by Victorinox for inclusion with their Quattro SwissCard in 2000. There is no need to purchase the whole card as the screwdrivers can be easily obtained singly.

These little flat three gram screwdrivers are never going to handle heavy work but may get you out of a fix on trail. I have certainly been able to use one of these to change internal workings of a trekking pole and tighten and release a screw-on tripod to the base of my camera when I had nothing else with me that would suffice for the job. 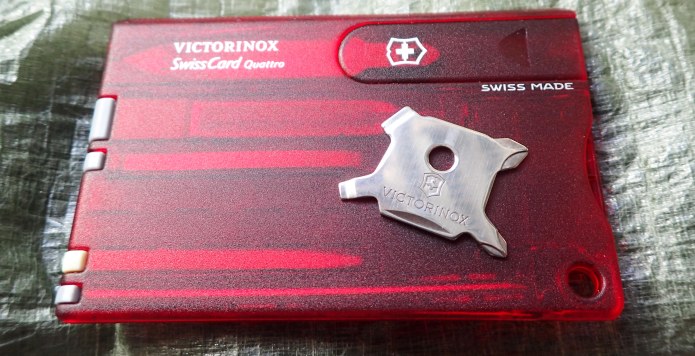 The unique flat 3g screwdriver that has been included in various Victorinox SwissCards is suited to Phillips 00-0, Phillips 1-2, 3mm flat-head and 5mm flat-head screws and take little room in a ditty bag

The Princess is a pretty old tool, first produced around 1980 but, just like most of the small 58mm Victorinox knives I am covering over the next few posts, it can be fairly easily picked up on the second hand market. The Escort is more easily purchased. Another plus factor for the Escort is that it is incredibly cheap and you can find it for a tenner or less. Despite this, for just a few quid more and a handful of extra grams, I feel that some other Victorinox 58mm tools can provide a great deal more functionality. I will cover many of these in subsequent posts. 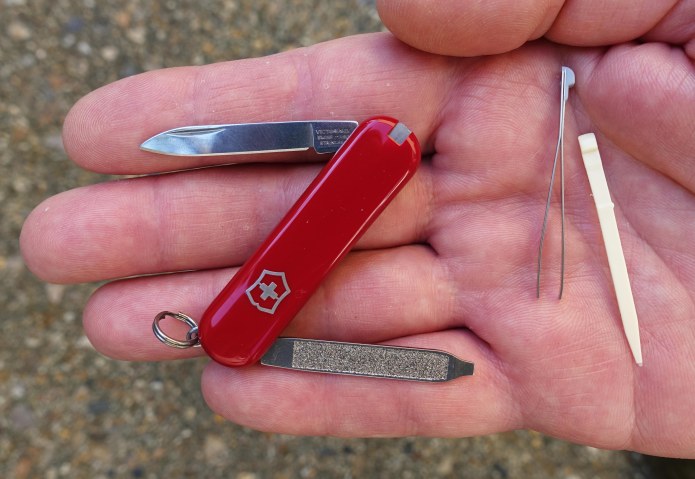 The Victorinox Escort is the fifth choice of Three Points of the Compass from the 58mm range. Well suited as a very simple tool for taking hiking